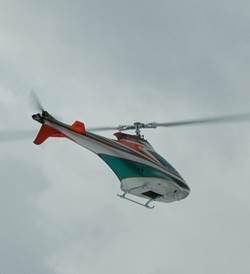 How is RC helicopter lift generated and controlled?

Great question! Without lift after all, an RC helicopter or any aircraft for that matter won’t fly.

For anything to fly – the amount of lift produced has to be greater than the force of gravity pulling it back to the ground.

"Why Won't My RC Helicopter Lift Off?"

This is one of the most common questions I get asked by people who contact me for help. There are two primary reasons:

With those two points in mind, let's first look at how lift is produced by all wings and rotors. This should then help you understand and figure out why your heli is not overcoming the pull of gravity.

The oversimplified airfoil diagram is only telling part of the story - a small part.

All things that fly, from birds to supersonic aircraft and yes helicopters too, rely on airfoils (also called aerofoils) to create lift.

How an airfoil (the shape of all wings, or rotor blades if looked at edge on) generates this lift is much more complex than the oversimplified low pressure above the wing theory most of us were taught in primary school, or even ground school for that matter.

To fly an RC helicopter, plane, glider or quad-copter, you certainly don't have to fully understand all the physics going on here (as I said, lift it's complicated stuff). Not only that, covering all the fluid dynamics going on with airfoils is well beyond my ability and the scope of this article. There are plenty of other good "lift articles" out there already - here's one.

I'll just cover the simple to grasp concepts that are important in relation to our understanding of RC helicopter lift control. Hint - generalizations galore!

The Two Main Theory's of Lift

Newton's second and third laws are arguably the primary contributors that explain airfoil lift. They are also the two that we have direct control over while we fly our RC helicopters.

Newton's second law is commonly represented by the formula F=MA (force equals mass times acceleration). Applied to an airfoil, this can be interpreted as the lift of a wing being proportional to the amount of air diverted down times the vertical velocity of that air.

Newton's third law states that for every action, there is an equal and opposite reaction. The action of the wing on the air is to force the air downwards while the reaction is the wing being pushed upwards. In short, an airfoil is a very effective air direction diverter or air pump.

To simplify all that - if we want more RC helicopter lift, our rotor blades can either increase their velocity, divert more air (mass), or a combination of both.

We will look at how this is achieved while flying our little egg-beaters shortly. I do however want to cover the second theory of lift. Partly because it's what many of us were incorrectly taught; and secondly because its the underlying principle responsible for one thing you have likely experienced while flying micro RC helicopters indoors.

Bernoulli's theory as it applies to fluid dynamics, states faster moving air/liquid creates lower pressure due to the conservation of energy. Nothing wrong with that and it's proven.

The misconception however is that Bernoulli's principle alone is responsible for lift, when in fact it's a small contributor.

The second misconception has to do with the air molecules being forced to speed up as they travel over the longer top distance of the airfoil, to meet up at the same time with the ones below. This is known as "equal transit-time" and again, is a fallacy.

The air flowing over the top of an airfoil is definitely moving faster than below.

Much faster than the equal transit-time hypothesis would suggest as shown in this animation.

The majority of lift is generated from the redirected downwash airflow. 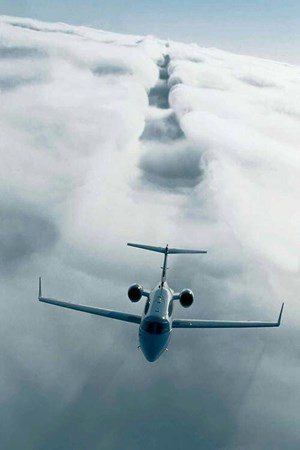 If the majority of lift was in fact created by a low pressure area above the wing or rotor, there really should not be much, if any air movement below.

If you've ever hovered your heli over your head, or watched a helicopter hovering over open water, snow, or a dusty surface, we know this is far from reality.

There is a massive volume of air being pumped downward by the rotor system.

Low pressure above the wing creating all of the lift would also not explain ground effect. 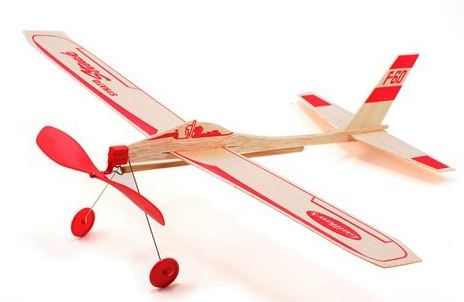 A flat slab of balsa still produces lift thanks to Newton's laws.

Bernoulli's theory literally falls out of the sky when trying to explain how a wing can produce lift when inverted.

It also doesn't address how a totally flat wing on a toy rubber band powered plane that many of us had as kids, or even something as simple as a paper airplane can generate lift.

So why am I still talking about Bernoulli's theory, and what does it have to do with your little micro RC heli?

Take a normal 8.5”x11” piece of paper and hold it between both hands length wise at the leading edge so the back edge of the paper flops down.

Now blow down and across the top of the paper, at about a 45 degree angle. What happens?

The back edge of the paper lifts up, even though you are blowing it downwards. That's Bernoulli's principle in action.

Which finally brings us to your micro RC helicopter.

Have you noticed the walls or windows in your house almost seem to be magnetic when your micro heli is getting fairly close to them? No matter what you do, it's very hard or perhaps even impossible to overcome this strange magnetic wall or window attraction.

It's a very real force the micro heli is experiencing, but it has nothing to do with magnetism - it's all due to Bernoulli's principle.

When a micro heli (or any size helicopter for that matter) is near a wall, the fast moving downwash air flow from the rotor creates a lower pressure area up against the wall compared to the other side of the helicopter. This pressure differential then pushes your little heli into the wall or window. It has nothing to do with your piloting skills :-)

We Need The Speed!

Newton's second law we just learned about shows us how the velocity of this air flow is proportional to the downward air flow pushing the wing upward.

Thus, the faster the air flows over the wing the more lift. This is a very basic explanation; there are other forces and factors involved such as drag, turbulence, flow separation, along with the shape of the airfoil that limit the speed of air over a wing and ultimately limit the amount of lift produced.

We Need The Pitch!

We call this positive or high angle of attack. What do you think we call it in the heli world? “Positive Pitch”. 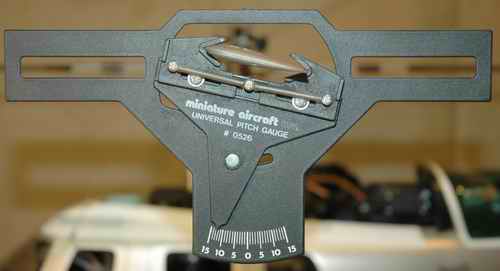 This picture shows a typical rotor blade edge on with a special RC helicopter tool called a pitch gauge measuring the angle of attack or pitch of the rotor blade. As you can see, this blade is showing a positive pitch angle of about +13 degrees.

So now let’s take the airfoil and pitch idea one step further.

If you look at the shape of that rotor blade airfoil in the above photo with the pitch gauge, it's identical on both sides. Thus the name symmetrical wing or rotor blade, same on the top and bottom.

Having a symmetrical airfoil shape on a wing or rotor blade now means airplanes and helicopters can fly upside down. By changing the angle of attack or pitch to negative when upside down, the rotor now produces lift in the opposite direction – pretty neat. 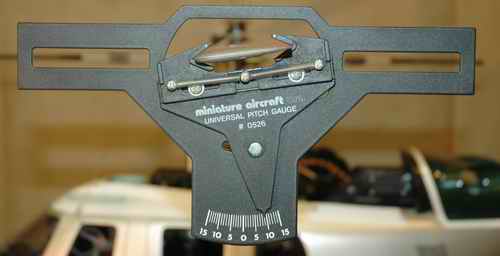 Here's our RC helicopter pitch gauge now showing a negative pitch angle of about -9 degrees. Because this is a symmetrical rotor blade, if the helicopter was upside down, the rotor would actually be creating a good amount of lift.

I demo how this "negative" pitch change occurs in the video below.

The rounded shape of the airfoil is responsible for keeping the air flow "bound" to the wing or rotor (boundary layer) as the angle of attack is increased - up to a point. If just a flat slab was used instead (like on our little balsa rubber powered plane), the airflow would easily separate above the wing, and create all sorts of chaotic turbulence, vortices and drag.

That's exactly what happens when a wing stalls. It's also what causes that scary "fluffling" sound you get from your RC heli rotor when over pitching it during hard aggressive flying.

Symmetrical airfoils like most of us are very familiar with on our RC helicopters are not as efficient at producing lift as a semi or flat bottomed airfoil. They are however capable of faster head and flight speed.

The "under-cambered" airfoil takes lift efficiency to the extreme. This shape is ideal for light weight micro fixed pitch applications and produces lots of lift - they are sometimes called high lift rotors. 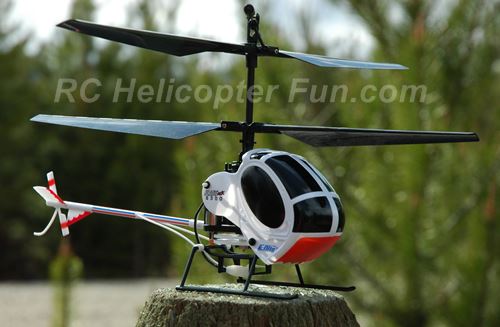 In our helicopter hobby, most fixed pitched helicopters (like our little micro coaxial above) will use under-cambered airfoils to create the most amount of lift for the amount of power available. As a result, smaller motors/batteries can be used for longer flight times and lighter helicopters. This is a good compromise seeing that fixed pitched helis can’t sustain inverted flight anyways.

The speed of these fixed pitched blades is altered by you the pilot, to adjust how much lift is produced. Faster head speed - more lift. Slower head speed - less lift.

Lift control by way of rotor speed adjustment can be somewhat vague, and imprecise because motors and rotors can't speed up and slow down instantaneously.

So... If you have a fixed pitch RC helicopter that won't lift off, the problem is not enough rotor speed. Some common things to check:

This method of controlling lift is both very precise and very fast. 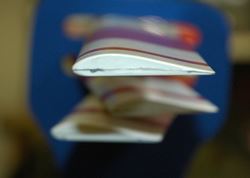 There  are RC helicopters with collective pitch that use flat bottomed or semi-symmetrical rotor blades to benefit specific areas of flight, such as auto rotations, or specific types of flying such as scale where inverted flight is not usually performed.

Once again, efficiency over performance!

However, most out of the box collective pitch, single rotor helicopter kits will come with symmetrical rotor blades because they are the best compromise for all areas of RC helicopter control.

So... If you have a collective pitch RC helicopter that won't lift off, the problem could be not having enough blade pitch, not enough rotor speed, or a combination of both! Common things to check:

These are very basic examples of lift theory and how it applies to RC helicopter lift. As we examine more areas of flight theory in the Direction And Cyclic Control section, you will see there are many other forces acting upon the helicopter that cause the amount of lift being produced by the rotors to be changing constantly.

This is why there is no such thing as a simple “up-hover-down” RC helicopter lift button on your radio or in a real helicopter – the dynamics are always changing and you have to keep adjusting the amount of lift produced to stay in control.