The RC quadrocopter, also called the quadcopter, quadricopter, quadrotor, and unfortunately drone; all fall into the classification of multi-rotor RC aircraft.

Due to how easy they are to fly (nothing like a conventional RC helicopter), quad copters are the most popular radio controlled vertical lift platforms; meaning they are able to take off & land vertically, hover, and fly in all directions. As the name "quad" suggests, there are 4 propellers arranged in a cross type configuration.

There is no single large collective pitch rotor or tail rotor that we are all used to seeing on a conventional RC helicopter.

For you RC airplane people out there, you will commonly call these "normal" and "pusher" propellers. 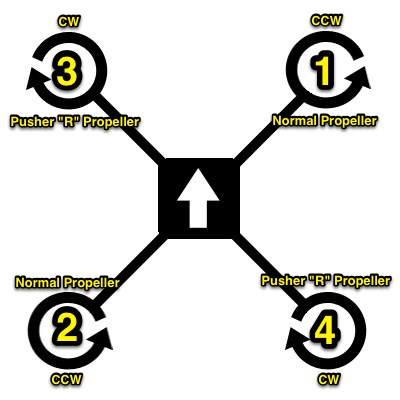 By precisely and accurately spinning these four propellers at different speeds, all the common directional movements of a standard helicopter are attainable.

To get a better understanding of how these 4 basic quadrocopter control movements are achieved by spinning the directional propellers at different speeds, below are a set of illustrations showing which propellers are spinning faster and slower to provide lift, pitch, roll, and yaw control. 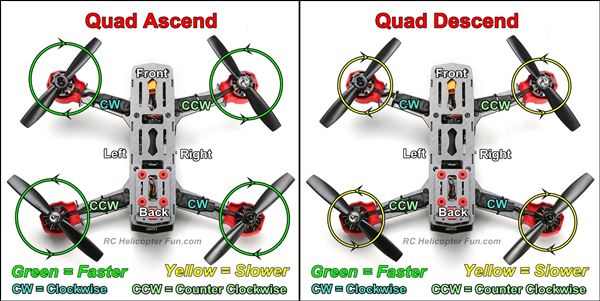 Quadcopter lift control is pretty easy to grasp. By spinning all four propellers at exactly the same speed to produce the same amount of thrust, the quad should remain level.

If we spin all four propellers equally faster, thrust is also equally increased and the quadcopter ascends.

If we lower the speed of all four propellers equally, thrust is reduced, and the quad will descend.

If we spin all four propellers at the same speed to produce just enough thrust to counter the pull of gravity, the quad will hover at a fixed altitude. 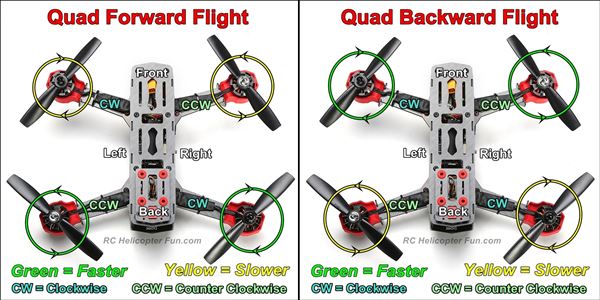 Quadcopter pitch control allows forward and backward movement of the quad by increasing and decreasing the speed/thrust on the two front and two rear propellers. If the speed difference between the front and rear props is substantial, the quad will flip forward or backward.

As seen in the above photo, if the rear propellers are both spinning faster and producing more thrust than the fronts, the quad will pitch or flip forward.

If both front propellers are spinning faster than the rears, the quad will pitch/flip backward. 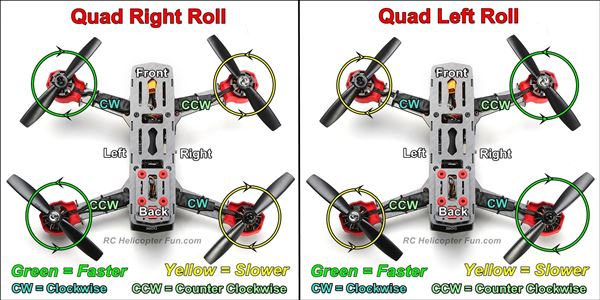 Just like pitch control of a quad where the front or back propeller thrust is changed, quadcopter roll is achieved by increasing and decreasing the speed/thrust of the left and right side propellers.

To move or roll left, the opposite speed/thrust condition is applied. Increased propeller speed/thrust on the right, decreased on the left. 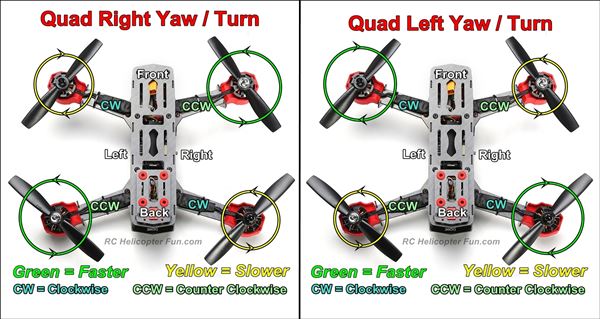 Quad/multi rotor yaw (turning) control is the hardest for many to grasp at first, but it too is very simple in principle.

As seen in the above photo, if we increase the speed of both CCW props equally while decreasing it on the two CW props; CW reactive torque is increased, and the quad will yaw/turn/rotate to the right.

If we do the opposite and speed both CW propellers up, while slowing both CCW ones down, the CCW reactive torque is increased, and the quad will yaw/turn/rotate left.

Out of the above 4 control movements, yaw control is the least reactive (strong). You are not altering thrust which can produce very strong and fast movement, you are altering torque which is not nearly as strong. This is why quadcopters can't yaw/spin/pirouette, nearly as fast as a conventional helicopter with a tail rotor.

That tail rotor link goes to my tail rotor page, and shows how a conventional RC helicopter tail rotor works by countering reactive torque. Reactive torque is also explained in greater detail if you don't really understand what it is, and how it can cause something to spin in the opposite direction of propeller/rotor rotation.

In most cases there are only 4 moving parts on the majority of quad rotor helis; the 4 spinning motor shafts which are directly connected to the 4 spinning propellers - that's it!

This also makes quad and multi rotor RC helicopters easy for enthusiasts to custom build their own machines quite inexpensively.

All that is needed is the frame, the motors, the ESC's, propellers, the receiver, and the electronic stabilization system (also called the flight controller), along with LiPo flight batteries of course.

The low cost & convenience of RTF (ready to fly) quads is however very attractive to most people who are just starting out.

For ease of explanation, I will stick with the quadrotor variety as it is the most common, and if you do end up getting this type of RC helicopter, most likely what you will be starting out with.

How Do Quads & Multi Rotor Work?

The reason RC quadrocopters and multi rotors are fairly new is the complex and rather heavy computing/processing power required to accurately control all the propellers to not only move the heli about, but to keep it stable. 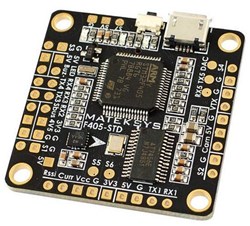 Controlling this manually is all but impossible and only because of today’s solid state gyro and accelerometer technology, efficient and fast responding brushless or coreless motors, coupled with small, yet powerful microprocessors to deal with the hundreds (even thousands) of calculations and correction commands every second, can these things fly at all.

When consumer available RC quadrocopters were first introduced almost a decade ago, they were not that performance minded as the emphasis was on easy going and super stable flight.

Times have changed however and many are capable of performing some fairly aggressive and fast aerobatic flight now. FPV "Racing Quads" are also very popular, and one of the fastest growing disciplines of RC aviation; with racing series even being covered on main stream sporting channels now.

Most hobby grade quads, and even some inexpensive toy quads are aerobatic these days, capable of performing fast flips and rolls, yet can be put into easy stable flying mode/s as well for beginners.

In these "easy" modes, the electronics on-board simply won't let the aircraft pitch or roll past a certain degree. The electronic stabilization systems also perfectly levels the aircraft out when the control sticks are returned to the neutral "center" position. In that respect, they behave very similar to a super stable micro coaxial RC helicopter, and why they make a good first RC aircraft.

The latest and greatest generation of mid priced to high end quad rotors are now sporting GPS positioning and an array of other sensors. This gives them even more fully autonomous hands off flight control, way point assigned flight paths, obstacle avoidance, "follow me tracking", and "return to home" capabilities if the radio link is lost.

The level of electronic sophistication required to keep these things airborne is remarkable. They are in effect "aerial robots" since in actuality you are not flying them like a conventional RC helicopter or airplane. You are basically just telling them what to do and the electronics and programming are 100% responsible for the actual flying.

Does A Quad Copter Make A Good First RC Aircraft?

Absolutely Yes! These make a wonderful first RC flying platform if you want the one of easiest flying experiences available to start with yet at the same time, have some aerobatic performance later on as your skills improve; provided you don’t really care about true single rotor RC helicopter flight or flight characteristics.

Quadrocopters for the most part appeal to a larger group of people who just want to fly something by radio control and don’t necessarily care for a "real" conventional aircraft feel, or look, or perhaps just want one of the coolest and fun flying gadgets around.

With entry level quad copters built for the masses, the costs are always dropping and it just keeps getting better for beginners.

You can be flying and flipping tiny palm sized quads such as this ATOYX AT-66 for under $35 bucks!

I personally don't think it's possible to cram as much flying fun into something so small, so inexpensively. 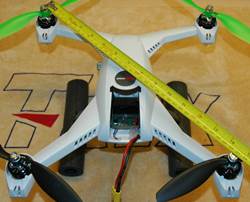 How To Size A Quad or Multi Rotor RC Helicopter

As shown here, the vast majority of quadrotors that are sized this way are referring the the diagonal distance in millimeters from each motor's center (motor hub to motor hub).

Hexa and octa rotors on the other hand are measured motor hub to motor hub on adjacent motor arms.

With this particular quad rotor heli, the diagonal distance from motor hub to motor hub is about 350mm. Yep, this a 350 size quadrocopter.

RC Quad/multi rotor safety a big can of worms to open. I've covered it in detail on my "RC Drone Page" so I encourage you to at least glass over that page as this is an important topic many newbies to RC flight are unaware of. Below is a good "basics" primer video as well...

Ah yes, the other main driving force behind the multirotor revolution and the absolute perfect job for them.

Since these things can fly themselves, hover like they are glued in the air, have superior lift efficiency, and don't take much skill to pilot, they have become one of the most popular vertical lift and flying platforms for hundreds of different aerial photo, video, and FPV applications from real-estate to sporting events to wildlife and nature.

If you can dream up a use for an "eye in the sky" - chances are there is an AP specific quadrocopter that can perform the task. Moreover, with all the electronic sophistication and on-board autopilot systems providing a very stable and pinpoint fixed position hands off hover; they give the operator/pilot the freedom and ability to concentrate fully on camera control if he/she so chooses.

One of the most common questions I keep getting asked almost daily right now is "what's the best ready to fly quadrocopter or multi rotor for taking pictures and video?

There are certainly all kinds out there, but right now, there is one brand that leads the pack in almost all areas... 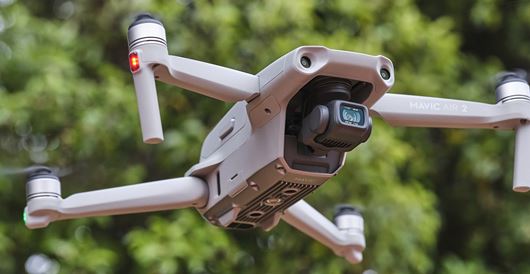 The DJI Mavic Pro 2, Air 2, & Mini quad copters are without question, the current top rated & best selling aerial imaging quads on the market right now. They include everything you need such as the 4k video camera and stabilization gimbal, as well as various "bundle packages" based on your specific imaging needs & budget.

The DJI Mavic's have very good GPS auto pilot & stabilization systems providing hands off hovering with the autopilot turned on, even if you get out of radio range or engage the "return to home" function; the GPS auto pilot systems will bring them right back to your position and auto land.

Combine all that with DJI's obstacle avoidance technology, and anyone can successfully fly a DJI Mavic while creating breathtaking aerial imagery.

These were a short lived experiment. I thought they would be more popular because they could hover inverted and perform true 3D flight similar to what conventional collective pitch RC helicopters can perform. They worked very well, but never "took off" in the marketplace. If you wanted to understand what makes them different from conventional quads, I have an entire writeup on 3D Quadrotors.