RC gas helicopters themselves are more or less exactly the same as similar sized nitro, turbine, or large electric. Gas powered RC helicopters are fairly big with the smallest being roughly the same size as 50 size nitro or 600 size electric.

Century RC's Radikal 20 Gasser seen below spins 600 to 660mm rotor blades, weighs in at about 4.5kg, and is powered by a 20cc two stroke gas/petrol engine.

The 2-stroke gas engines used in gas RC helicopters are very similar to all single cylinder, air cooled, two stroke gasoline engines; just like what you might find in your gas leaf blower or chain saw.

As far as fuel, they use regular - premium gasoline/petrol mixed with a quality racing two-cycle engine oil.

The sizes of these two stroke engines are also similar to what you might find in a gas powered weed whacker or small chain saw. The most popular 2-stroke gasoline engines for model aircraft are usually in the 20cc - 30cc range. Unmodified, they produce about 1.75 kW (2.5 hp) of power, and tip the scales at around 1.5 kg (3 to 4 lbs).

Gas powered RC aircraft engines have some interesting differences over the garden tool variety. Click on that link to learn more about these engines and discover the pros & cons they have over nitro engines.

Because gas powered RC helicopters are fairly large, and powered by rather heavy two stroke petrol engines, the power to weight ratio of Gassers is fairly low compared to that of nitro or electric.

You won't find a gas powered heli for example performing the hard core 3D smacking you see the new electric stuff doing these days. That certainly doesn't mean you can't still throw them around; and for sport or lighter type 3D flying, they are very nice fliers as shown in the video below.

The big advantages with gassers are flight times can be fairly long (up to 30 minutes with some of them). Fuel costs are easily 1/3 to 1/4 that of nitro, and unlike electric, you don't have to cart a bunch of big expensive LiPo packs around for back to back flights. With a gas RC helicopter, you just land, refuel, and go flying again.

Likewise, people in remote locations far from city hobby shops where shipping costs for nitro fuel and now even LiPo battery packs is prohibitive; can find gassers to be godsends because of the easy to source fuel.

Lastly, if you want a large fuel powered RC helicopter and don’t want to spend many thousands of dollars on a turbine RC heli – gas is the way to do it.

As seen below on Century RC's Radikal G30; gasser mechanics are not much different than nitro. Perhaps the biggest noticeable difference is most gasser engines have side mounted carburetors allowing easier carb tuning access and the ability to fit an air filter if you wish. 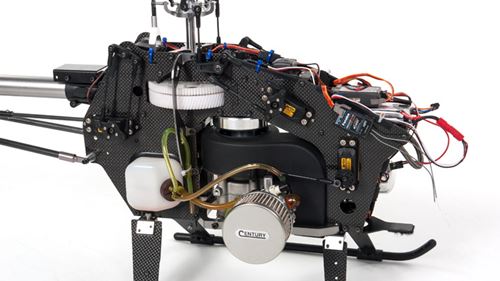 A large gas RC helicopter is obviously not your best choice for your first RC heli because of the higher cost of the kit, complexities involved building it, and dangers involved when flying a large model. Gassers (due to the large reciprocating piston mass in the 2-stroke engines) are also vibration prone; so you have to understand how to deal with that on a model RC helicopter as well.

However, once you have mastered a nitro or larger electric helicopter, a gas powered RC helicopter makes a lot of sense for some folks.

If your goal is large scale RC helicopters, gas power is also a very viable option. You don’t need the high power to weight ratios to perform scale type flying where your most extreme maneuver won’t be anything much more than a steep stall turn.

In fact, the added weight of the gas engine actually makes your heli fly a lot more scale like. More weight means more stability and longer, more pronounced cyclic commands to slow or change directions. The inside of your fuselage and windows won’t be covered in nitro oil residue either – a nice benefit.

As far as the field equipment you'll need for a gas RC Helicopter, it's pretty much identical to a nitro model other than not needing a glow plug power panel or driver and likely no electric starter is required either. 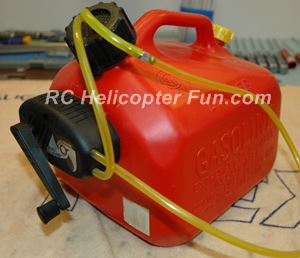 I like most folks use a simple hand crank fuel pump attached to a small plastic petrol Jerry jug for refueling & de-fueling.

You can reverse the pump flow by cranking it backwards.

This one I made by gluing the pump to the 4L jug with RTV silicone.

The yellow fuel tube is specific to gasoline applications (Tygon brand tubing in this case).

You can't use silicone fuel tubing that you use with nitro because it will degrade when exposed to gasoline.

The radio equipment & flybarless unit will be the same as in a large nitro or electric model.

Note, not all FBL units are able to be used in high vibration environments such as Gassers; so do your research when choosing an FBL system for a gas RC helicopter.

Bavarian Demon's 3X & Axon are generally safe bets along with Futaba's CGY760R & CGY755 and Mikado's V-Bar in the metal case.

All gasser RC helicopters should use a governor to control the carburetor servo as over speeding the engine while unloading the rotor disc is very easy. Most of the good FBL systems listed above have good built in governors for gas & nitro engines; but external governors such as the Futaba GY701 will work fine too.

You may have the option of starting a gas powered helicopter engine with an external electric starter (like on a nitro heli), but most come with a pull start recoil cord (like on a typical gas powered garden tool).

The recoil is mounted on the back of the crankcase so in most applications, it's located under the helicopter below the side frames, giving easy access to pull the recoil cord to the left or right of the helicopter.

Gas RC Helicopters On The Market

Unfortunately, gassers due to their narrow niche market are becoming harder and harder to find. No question, the direction of "main stream" RC helicopter manufacturers is toward grossly overpowered, hard core electric 3D machines leaving the gasser enthusiast high and dry. That said, there are still a few options out there.

Perhaps the most common here in North America that were known for their gasser line was Century Heli with their "Radikal" brand.

Unfortunately, Century Heli, like so many have more or less faded into the RC heli history books.

I'm mentioning Century Heli's Radikals in this article for the simple reason used ones show up and they are worth looking at if you are considering a used gas RC helicopter. Parts availability (lack there of) is of course the killer. Some used ones however will have a good number of spare parts included with the sale.

Miniature Aircraft USA - They're back :-) 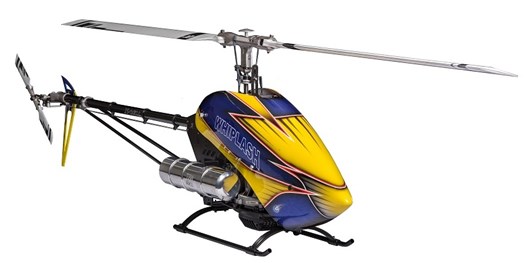 Miniature Aircraft USA was the first brand I used when I got into the hobby way back in 1989. I, like so many others were deeply saddened when they closed down back in 2014 after over a quarter century in business and making some of the best RC helicopters the world had ever known.

A group of loyal Miniature Aircraft RC helicopter enthusiasts purchased all the remaining parts, kits, production tooling, and product rights shortly afterward so Miniature Aircraft USA lives on under different ownership, and a new location based in Germany.

Miniature Aircraft USA had one of the best gas RC helicopters available at the time called the Whiplash-G; and now under new ownership, that wonderful machine is available once again as the new and improved flybarless Whiplash-G II.

It's in my humble opinion, the best gas/petrol sport/aerobatic RC helicopter currently on the market. Then again, I'm a Miniature Aircraft fan boy.

Bergen RC remains to be one of, if not the last USA based RC helicopter manufacturers left.

Chris Bergen's RC helicopters are known for their robust quality and best mechanical CCPM layouts in the biz! Heavy old school machines, but they last for many years / decades with proper maintenance and care.

I fly the turbine powered Bergen Intrepid, and it's now almost 14 years old. With thousands of flights, it remains to be one of my best and favorite RC helicopters. Naturally much of that praise is due to the turbine power plant, but there is no reason the 2-stroke gas powered Intrepid would be any different in the longevity department; apart from the higher vibration environment it's exposed to.

Last up is Vario Helicopter.

They do however also offer pod and boom Benzin gas powered RC helicopters in several configurations, some of which that can be later adapted for their scale applications. 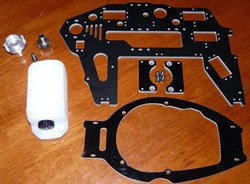 The other popular gas RC helicopter option is to convert your larger nitro or electric into a gasser with a gas conversion kit.

These kits generally include new frames and base plate to accommodate the larger gas engine along with engine mounts. 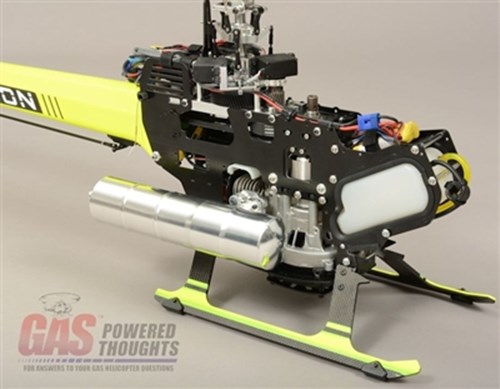