Electric Helicopters
They'll Give You A Charge

This of course is due to better battery, motor, and micro electronic technology that was not available over a decade. Costs have also dropped! Basically all the reasons I already covered on the Best RC Helicopter Power page. 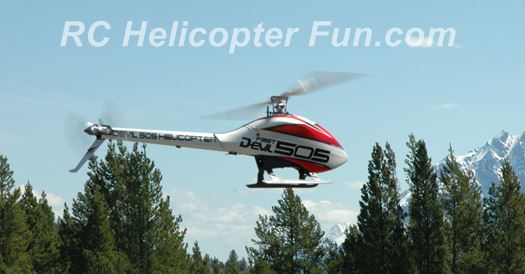 Don't think electric RC helicopters have caught up to & surpassed nitro in terms of performance and better power to weight ratios? Well, watch Bert put a SAB Goblin 700 through the paces (same size as a larger 90 sized nitro powered bird).

These "speed specific" designs such as shown above are built for one thing and one thing only - setting speed records.

The tall shape of the canopy covers as much of the exposed mechanics and rotor head as possible. Likewise these speed specific electric helicopters are very thin in width making them very "slippery" to the air.

Not being constrained by bulky engine, fuel, and exhaust systems, along with many electric motor placement options, allows electric RC helicopters to take on some stunningly streamlined & beautiful designs as shown above with the exotic looking Takumi 700CF.

My personal favorite thing about electric helicopters is the noise they produce. Watch/listen to that Goblin 700 video and you'll know exactly what I mean.

The quiet electric motor really allows you to hear the rotor blades interacting with the air and "barking". That sound is hard to beat. It's why most of us want to get into larger RC helicopters as you don't get that wonderful noise with small ones. Tail rotor noise is also more noticeable.

True, LiPo battery shipping has also become a hassle & costly in recent years; but they are still easier to source and less costly to ship than nitro fuel. Electric RC helicopters are simply more convenient and vastly more reliable in most cases.

The other neat thing with electric helicopters is the motor and gearing spinning sound somewhat similar to a turbine powered RC heli making them increasingly popular in scale RC helicopter applications providing a more realistic sound. 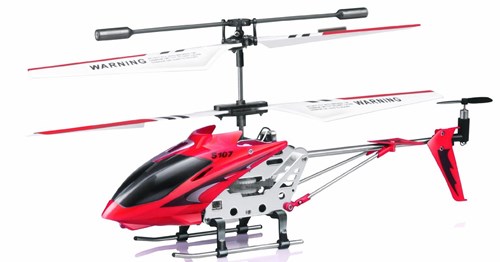 There are a few slightly larger electric helicopters with rotor diameters approaching 7 feet (2000mm), and a few slightly smaller at just under 6 inches (150mm), but that should give you a fairly good idea of the electric RC helicopter "size spectrum".

The other HUGE benefit with "smaller" size electric RC helicopters is they can conveniently & safely be flown at home, both inside and out.

Due to increasingly overreaching RC flying regulations world wide (mostly caused by irresponsible rc drone fliers I might add), small & safe electric helicopters such as these might be the only type of RC helicopter some of us are legally allowed to fly anymore.

Shown in the video below is the micro sized electric Trex 150X collective pitch RC helicopter being flown indoors, performing aerobatics. This is something us RC helicopter enthusiasts could have only dreamed of a decade ago; but now thanks to clean electric power and micro electronics, the dream has become reality.

The overall design of hobby grade single rotor collective pitch electric helicopters is no different than that of nitro or gas.

The controls, construction, and setup are very much the same. In fact, several manufactures offer the same model helicopter kit in both electric versions and nitro versions, or supply electric conversion kits.

The main differences are having an electric motor instead of a nitro or gas engine, a battery pack/s in place of a gas tank, and an electronic speed controller (ESC) in place of a throttle servo.

No more clutch & cooling fan to worry about either with electric which eliminates several of the fastest spinning components on a fueled power helicopter along with the high frequency vibrations that are often produced by those components.

The photo below shows a typical layout/position of these "electric heli specific" components. 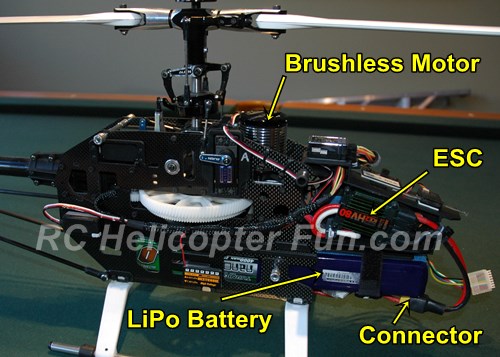 As indicated earlier, there are three main reasons electric RC helicopters have caught up to the performance of nitro helis and are poised to surpass them in some areas: 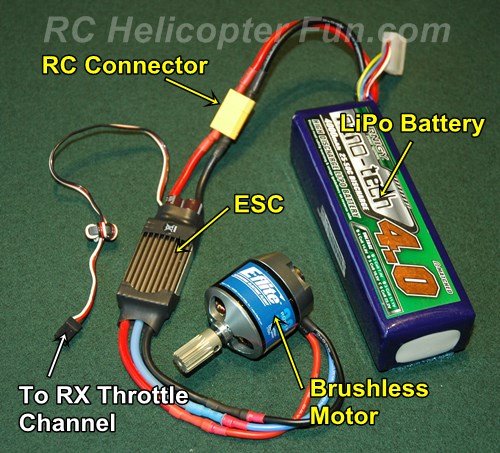 The photo above shows how these three main components are connected electrically.

Brushless DC motor is actually an incorrect description for these motors. They are in fact a 3 phase AC motor, but the hobby industry has more or less adopted, and uses the fundamentally incorrect description. Likely because it's easier and more intuitive for people to understand.

Sounds kinda funny when you say your RC helicopter is powered by a 3 phase AC motor when the power source is a DC battery. People will look at you like you have lost your marbles, but you know better :-)

Without these three technologies, electric RC helicopters would remain small with poor performance.

What About Costs? I Heard Flying Electric Is Much More Costly Than Nitro?

That perhaps was true a number of years ago when LiPo batteries were grossly expensive but this is certainly no longer the case.

This is a good question however so let's look a little deeper.

Electric flight can get expensive if you want to be flying back to back flights between battery charges because you will need several packs and on bigger birds, it's not hard to have as much or more invested in LiPo packs as you have in the heli.

Computerized LiPo chargers and power supplies for the chargers are also required so that adds to the costs; however you never have to purchase fuel again and nitro fuel is pricey as well. Pay up front for electric or pay as you go for fuel.

In the long run, you will generally be money ahead in operating costs with electric over nitro fuel - even with the bigger birds.

Sounds expensive when you look at it that way, but when you break it down to cost per flight the numbers get really attractive.

If we treat our LiPo's with the care they deserve, we should be be able to get at least 1800 flights out of those 6 pairs of packs over their life span. This is assuming 300 charge/discharge cycles on each pack which is a possible life span, albeit with kid glove care.

So that works out to about 50 cents a flight. Let's be a little more realistic here and say we don't give these LiPo's the best treatment and half their life span down to 150 flights or so. We are now looking at $1.00 a flight.

We haven't factored in the costs of charging equipment and electricity for electric or the slightly longer flight times of nitro; but even then, the cost per actual flying minute between both are still lower with electric in almost all cases.

Please don't let those high battery costs scare you away from electric. You certainly don't need to purchase all the packs at once. I slowly built up that small heard of electron storage over the course of several years. Also, those numbers were using a large 700 size helicopter as the example.

Smaller electric birds don't use expensive packs like that and you can purchase a half dozen or so LiPo's for a very reasonable price.

Base Your Future Electric RC Aircraft Purchases On What LiPo Packs You Already Own Will Save You Even More Money.

This is a trick so many of us electric fliers do that can save a good deal of money. Once you are into electric flight, no question, your LiPo battery bank will start to grow in number. Purchasing other electric helicopters, airplanes, or quadrotors after researching what voltage/capacity LiPo packs they use will allow you to utilize the packs you already have so you don't have to get new ones.

Likewise, as your LiPo packs wear out over time, the new replacement ones you get of the same voltage & capacity will continue to work in your "electric RC fleet" that share these LiPo packs.

For example, one of the most useful voltage and size/capacity LiPo packs I have are 6S 5000 mAh ones. I have a good number, of them and they work in a good deal of electric RC aircraft that I chose to specifically utilize my growing number of 6S 5000 mAh packs. 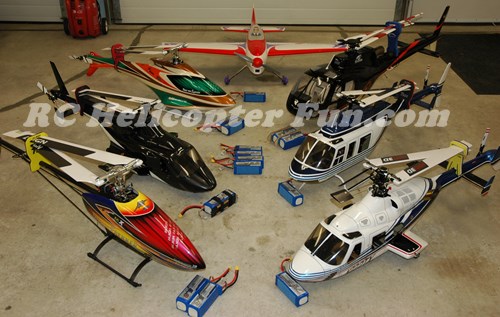 Shown in the photo above are most of the electric RC aircraft I currently fly that use 6S 5000 mAh packs. Some of the larger helicopters here need two 6S 5000 mAh packs (as I mentioned before about the Trex 700); but again, these are just such useful and universal size LiPo's for so many larger RC helicopters & planes.

The reason I am impressed with most of Blade's stuff is you can find Blade helicopters & replacement parts at almost every decent hobby shop. As you know, parts availability is one of the most important criteria I place on choosing a good heli.

Below is a video review on the XK K110 micro collective pitch heli that I consider to be the best one in their fleet to start with.

Once you progress in this hobby or want to start out with a higher quality bird off the bat - OMP Hobby's helicopters offer up the best quality & performance for the price in my opinion (best bang for the buck as the saying goes).

Below is a review I did on one of their most popular models, the 200 size M2 V2.

From the Trex 470L to the large 800E, Align's parts and components in all their kits are top notch. I really like their "super combo kits" which come with all the electronic components and that can save considerable coin over sourcing the components all separately.

Once again, just like Blade, Align's parts availability is good world wide, but Align's quality is much better.

If you already can fly collective pitch and are looking for one of the best high performance and highest quality electric helicopter brands out there, it's hard to beat SAB Helicopter and their line up of Goblins from the small 280 up to the large 770.

SAB Goblin's pretty much rule the skies these days when it comes to high performance 3D competitions and are one of the most successful RC helicopter brands going right now.

Like all RC helicopters, electric helicopters are a compromise between size, power, performance, and flight times. In recent years however, those compromises have faded substantially.

I only have one nitro heli left in the fleet and I rarely fly it anymore compared to the hundreds of flights I log on electrics. Yep, I'm one of those old nitro guys who has been converted to electric!