Understanding Model Jet Engines
Sound & smell - why we love them.

When I first started doing research on model jet engines (also known as model turbine engines) years ago, I was at first amazed a jet turbine engine could be made so small and even though they were a few thousand dollars, I actually thought they would have cost more. 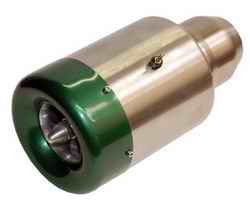 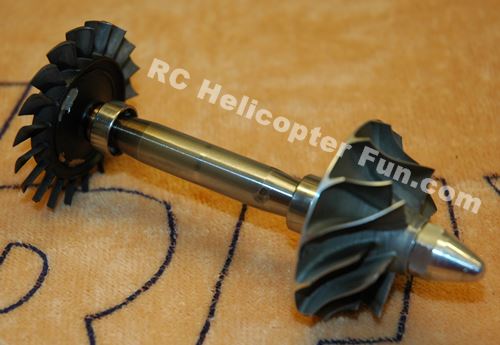 Model Turbine Shaft Assembly. Turbine On The Left, Compressor On The Right, Shaft Connecting Both. 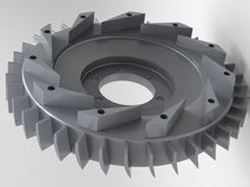 The three most complicated parts of a model jet engine are the compressor, the diffuser/stator assembly, and the combustion chamber where the compressed air enters the combustor and fuel is vaporized and evenly distributed to ensure proper and complete combustion.

This is where model jet engine development costs are astronomical to even get these things to run; never mind run consistently & reliably throughout the entire RPM range of the model turbine engine.

Shown below is the stainless steel combustion chamber out of my Wren MW54 model jet engine while I had it apart for inspection and overhaul. The diffuser stator vanes shown aid in combustion and cooling as they redirect the swirling turbulent air from the compressor into a smooth flow, lowering the flow velocity while increasing pressure before being introduced into the combustion chamber. 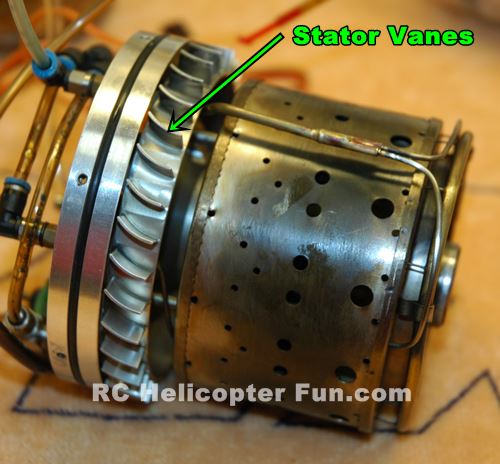 The materials are very important and have to be of the highest quality to be able to withstand the high temperatures and the extremely high centrifugal forces produced.

The rear turbine in this model jet engine for example is cast from Inconel 713. The same expensive, exotic, nickle-chromium alloy that is used in many full size turbine engines.

After all, the compressor and turbine blades are spinning upwards of 200,000 RPM.

I still can’t get my head around this number - that’s over 3000 rotations per second! Even at idle, these little engines are spinning at around 50,000 RPM (almost 1000 revolutions per second).

Exhaust gas temperatures can get as high as 850 degrees Celcuis during start up; the hottest and most dangerous time of all jet engine operation for model and full size alike.

As there is little airflow through the engine at this time, cooling is at it's lowest during startup. Hot start turbine damage (melted or over fatigued parts) is one of the most feared outcomes of improper starting of any turbine engine. Thankfully these days, the FADEC engine control system almost eliminates any possibility of hot start damage in our little model jet engines. 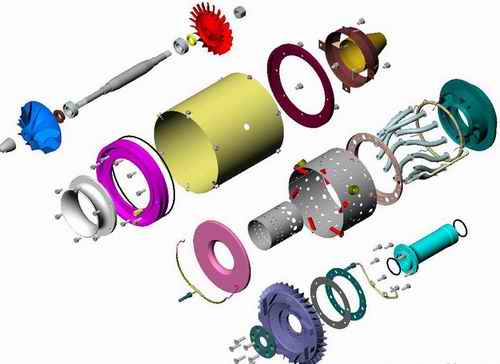 As you can imagine, machining tolerances are absolutely critical as is balancing on these little engines. It's the high quality materials, precision, hand assembly, and the decades long development costs you are paying for.

The two following photos show this precision & quality very well. During my Wren MW54H turbine engine overall where the ceramic bearing had to be replaced; I had to send the entire Inconel 713 turbine wheel and shaft back to Wren Power Systems Ltd. I could have replaced the bearing myself, but the turbine must be removed from the shaft to facilitate bearing access, and afterward the assembly would no longer be in balance. 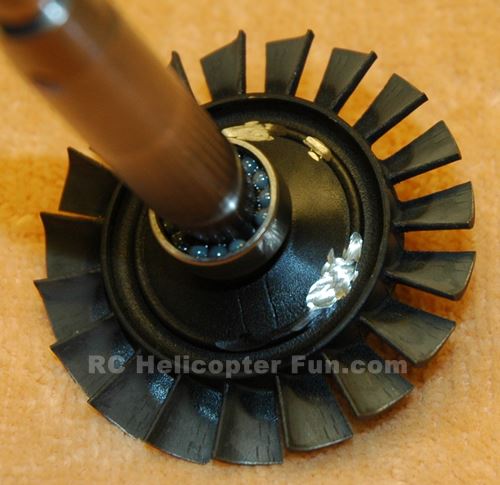 After the technicians at Wren Power Systems replaced the bearing, they had to then dynamically balance the turbine and shaft assembly using a very precise dynamic computerized balancer.

Small amounts of metal are then ground off both the turbine wheel (both front & back faces) as well as on the front of shaft to achieve perfect dynamic balance of the entire assembly. This takes time, skill, and care to do correctly.

The video below shows a very "quick" overview of the model jet engine manufacturing process. Not everything is explained correctly, but you will get the general idea of "how it's made".

Here's another interesting video showing a see through model jet engine in operation.

The fuel used in these little jet engines is the same as the big ones:

Jet-A, regular kerosene & some even allow use of readily available diesel.

You must also add a little bit of lubrication oil such as Mobil 254 Jet Oil, to the Jet-A, kerosene or diesel. This oil is used to lubricate the bearings.

That said, jet oil is not exactly the best stuff to be burning and breathing in as it's considered to be quite toxic.

Moreover, not much of the fuel oil mixture is actually diverted to the bearings for lubrication; so in effect, you are burning the vast majority of this toxic oil that isn't even being used for lubrication purposes.

Mobil Jet 254 is also getting bloody expensive! Up here in Canada we are shelling out about $40 for a quart!

I'm not saying Mobil 254 is not a good model jet engine lubrication oil (I used it for a good number of years), but most manufacturers now agree its toxicity dangers outweigh its decent lubrication properties and recommend using a good quality 2-cycle oil; which after all has been designed to be burnt with limited toxicity. I have since switched to a good racing 2-cycle non-synthetic lubricating oil and have had no issues.

The reason I went with a non-synthetic is some synthetics don't mix well with Jet-A and will settle out. An easy way to test that is to mix some 2-stroke oil with Jet-A, put it in clear glass jar and let it sit on a window ledge for several weeks. If the oil doesn't separate from the fuel, you'll know for sure it won't settle out. Best oil recommendation is to check & confirm with your engine manufacture and what specific lubrication oil they recommend.

No matter what oil is used, typical mix ratios range from as low as 40:1 (about 2.5% oil) up to as much as 20:1 (about 5% oil) depending on the engine manufacturer. Kerosene & diesel can be purchased anywhere; you can purchase the jet oil from any aviation facility that services turbine engines/turbine aircraft and Jet-A fuel from most airports or heliports.

Heliports seem to be more accommodating for this Jet-A fuel service since they are used to refueling in smaller amounts and have the proper equipment for it. I just take a couple 20L kerosene specific jerrycans (the blue ones) and a large funnel to our local heliport and they have no problems with pumping out small quantities like that. Not to mention it's a great excuse to see the big birds and talk helis with the the chief operations pilot.

The guys/gals there (pilots, technicians, and even the office staff) are also usually rather interested in seeing the model jet engine and helicopter - they get a kick out of it...

It doesn't hurt to take your model the first time you befriend your local heliport or airport to explain exactly why you want a smaller quantity of Jet-A/A1 (they will ask and want to know what it's being used for). Chances are they will be very interested in the model and want to know more about the hobby in general. It's a great opportunity to promote our hobby in a fun and positive way.

With the basics out of the way - now let's find out how model jet engines actually work and function.