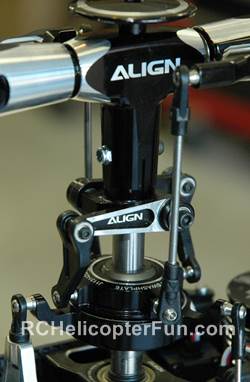 Cyclic RC Helicopter Control is what makes RC helicopter (all helicopters for that matter) so bloody awesome!

Cyclic control allows a heli to hover in one spot, fly forward, backwards, left, right, side to side, flip, roll, or any combination.

All aircraft flight is defined by three basic movements:

Both pitch and roll movement of a helicopter are controlled by cyclic!

Out of all the RC helicopter controls, cyclic is truly the most dynamic in nature; while being the hardest to not only understand, but also learn how to properly (precisely is a better term), control when learning to fly one of these egg beaters.

Incidentally, you will often hear cyclic called aileron and elevator.

Usually by RC folks that don't fully understand helicopters, but there is a real reason for this misunderstanding. Most if not all all RC radios use airplane terminology, not helicopter terminology. This, coupled with the fact that the same stick/channels that control the aileron and elevator on an airplane, are also used to control the cyclic on a helicopter, is the other reason for the misnomer. Let's clarify this right now :-)

Cyclic roll is responsible for moving the helicopter left and right or roll left and right. Same as the ailerons making a plane bank or roll to the left or right.

Cyclic pitch is responsible for moving the helicopter forward and backward. Same as the elevator on an airplane pitches the nose of the airplane up and down.

Why Is It Called Cyclic?

The most obvious reason is helicopters don't have wings with ailerons, and tails with elevators (the moving control surfaces on the wings and tail of an airplane that control roll & pitch).

All our pitch and roll control comes from the main rotor blades. This is where the term cyclic comes from - the cycle of the rotor blade as it makes one revolution.

If we look at the rotor blade one step at a time during a rotational cycle, this will hopefully make more sense.

Besides lift, our RC helicopter rotor blades also produce thrust. This is what allows our helicopter to fly forwards, backwards, sideways, or any combination of those.

This is where an airplane wing and helicopter rotor blade take on different characteristics. The rotor is spinning just like a propeller and therefore not only produces lift it also produces thrust.

If you think of a rotor as a propeller, it's really easy to understand how a helicopter can fly in all directions.

Okay, let’s take that complicated rotor system off our RC helicopter and replace it with a simple propeller.

This propeller is on the top of our helicopter exactly horizontal & level to the ground so the thrust is pulling the heli straight up.

In this very simple example, the helicopter will lift off the ground and go straight up as the propeller speeds up or the pitch is increased (assuming the helicopter is not sitting at an angle such as on the side of a hill).

If we match the amount of thrust generated by the propeller to the pull of gravity force, the helicopter now hovers.

Now let’s tilt the propeller on the helicopter a little bit with our cyclic RC helicopter control... How about tilting it forward a little off perfectly level horizontal.

What about sideways? Exactly the same. Tilting the propeller to the right will produce thrust to pull the helicopter to the right – opposite if you want to move to the left. These movements are referred to as rolling.

On the RC helicopter, we often call the spinning rotor the "Rotor Disc" because in flight, you can see this opaque disc above the helicopter. While on the ground (with the blades spinning) you can also see this opaque rotor disc tilting forward, backward, left & right when giving cyclic stick commands on your radio just as if our propeller example was tilting in all those same directions - so how does that happen?

Now our cyclic RC helicopter controls don’t actually tilt the rotor on the rotor mast, but they do allow the rotor disc to tilt because of CYCLIC PITCH CONTROL.

How does it work?

By changing the angle of blade pitch (angle of attack) of each rotor blade as it makes one revolution or cycle, we can vary the amount of lift (or thrust if you prefer to think of it that way), anywhere withing the rotor disc and thereby move the helicopter in any direction. That is why it's called cyclic pitch control or just plain cyclic because the rotor blade pitch change occurs once during each revolution or "cycle" of rotation.

We are in effect, creating an imbalance of lift (or thrust if you prefer) within the rotor disc, with one half of the disc producing more thrust than the other. When performing aerobatics, the imbalance from side to side can be so great, one side will be producing positive thrust while the other is producing negative thrust. It's this side to side imbalance that creates the tilt of the disc.

As you now know, this is called Forward Cyclic.

You might think to achieve more lift on the back than the front; the rotor blade will have more pitch when it is at the back half of the rotor disc than the front half. However, because of the principle of gyroscopic precession this is not where these pitch changes occure, but hopefully you get the basic idea of how it works. 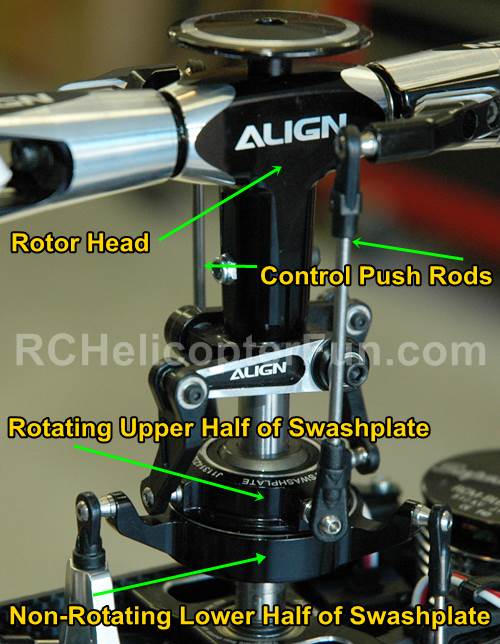 With all these cyclic changes going on to keep the helicopter under control, the resultant lift is always changing. As the helicopter pitches or rolls in a certain direction, some of the upward lift/thrust is lost to directional thrust.

If you just imagined the helicopter started to lose its fight against gravity you are 100% correct. Unless the cyclic control input is small, you will have to also increase the amount of lift to the rotor blades so the helicopter doesn’t start losing altitude. The opposite is of course true when you level out and all the lift is now directed against the pull of gravity again. Unless you decrease rotor  lift, your helicopter will start gaining altitude.

I think you are starting to see some of the changing dynamics going on that make flying a helicopter a challenge. Wind – even light breezes will push you around and change the translational lift too. That is why no wind or a steady breeze is better than a gusty breeze. We haven’t even started talking about torque yet – but the good old gyro has helped us out a lot with that one.

If this all sounds too complicated or difficult – don’t worry!

You don’t have to understand it all right away. As long as you understand what cyclic control is & does, and what the different cyclic commands do – i.e. forward cyclic makes the swashplate tilt forward and results in the helicopter pitching & flying forward, you'll be fine :-)

I wanted to go into more detail than that however so you know exactly how cyclic works, and how it imparts both pitch & roll movement to your helicopter through the swashplate.

You will have to understand this by the time you set up your helicopter.

If for example, you push your cyclic stick forward on your radio and see the swashplate on your heli tilt backwards to initiate backward flight, you have something setup incorrectly.

Same with left and right.

Helicopter Controls sometimes don't make much sense at first. However once you realize how it all works and how each control is so dependent on the other - it makes you realize how incredible these aircraft are.