The 3D Quadcopter
Why They Never Caught On?

You know it they had to try it sooner or later... The 3D quadcopter.

In other words, a quadcopter that can do many of the same aerobatic maneuvers a collective pitch RC helicopter can. They certainly don't look as pretty or sound nearly as good while doing them, but to each their own.

As an aerobatic single rotor collective pitch practice aid however, I can see some fairly important benefits in a 3D quadcopter; namely easier & less costly repairs along with an inherently more robust and mechanically simple aircraft to practice with.

Motor direction change was the most popular method because it costs less and is not as mechanically complex as changing the pitch angle of the propeller blades.

This method was also popular because on some quads, it was as simple as a firmware update to have  3D capability if they one chose.

There are basically three individual items that make the "direction change" method possible:

Brushless motors are the main technology that makes this possible because they allow sudden and fast reversal with no harmful and accelerated wear & tear on the motor that all brushed motors would fail from in short order if they were constantly being subjected to direction changes.

Next up is the reversing ESC.

A reversing ESC does exactly what it says it does. It not only allows proportional motor speed control as all ESC's do, it also allows that speed control in both directions on either side of the "mid throttle stick position" (at least with a linear throttle curve as seen in the video below).

The last important ingredient are the propellers. All fixed pitch quadrotor propellers as you likely know are purpose designed to rotate in a specific direction (either clockwise or counter-clockwise). Yes they will produce negative thrust if you reverse them, but they're extremely inefficient when run in reverse. 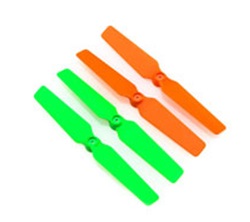 3D fixed pitch quadcopter propellers on the other hand are quite different.

They basically have two leading edges and are 100% symmetrical in design so they can be run in both directions (CW & CCW) with equal amounts of positive and negative thrust produced when spinning in either direction. There is an efficiency cost however with these "dual direction" props.

A propeller that is designed to run in one direction is much more efficient than a dual direction prop, perhaps as much as 30%.

So, assuming the proper firmware updates were available; all one would need to convert his/her quad to a 3D quadcopter are 4 reversing ESC's and 4 dual direction propellers.

In fact, Blade was the first to offer this 3D firmware update for their little Blade 200QX quadrotor. For the price, this one is was hard to beat and anyone who already has a 200QX, it was definitely a worthwhile (and free) firmware update to perform.

As popular as I figured these would be, they never caught on. Why?

Easy - they actually take skill to fly, something that few quad fliers want to learn as quads are all about easy out of the box flying. There is simply very little interest in a quad rotor that takes almost as much skill to pilot as a collective pitch helicopter. Sad, but true...

The Blade 200QX was very inexpensive not to mention so many people already had one and all they had to do is download the free firmware, install a set of 3D quad props for it (about $14 bucks), and were in inverted business.

As a collective pitch inverted practice aid - it simply can't be beat! Unfortunately, not many saw it that way and the proverbial plug was pulled.

At any rate, as simple as the "directional motor change" method of quadrotor thrust reversal is, there is one fairly big problem with it...  Efficiency, or rather lack thereof.

There are two efficiency issues with the the direction change thrust reversal method. One was already mentioned - the dual direction propellers.

Next up is just how much power is used up (wasted) when an electric motor reverses direction - it's huge!

Flight times are Easily Reduced by 50% over that of the same size conventional fixed pitch quadcopter running on the same voltage & capacity LiPo battery pack.

To understand the basic principle of how these work, just think of a quadrotor having a conventional variable pitch tail rotor running horizontally on each of the four quad booms/arms. 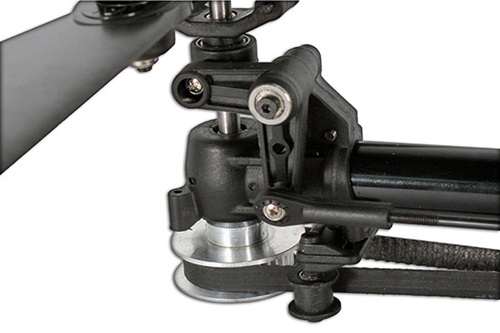 This is by far the superior way of achieving thrust reversal (at least when it comes to efficiency). The draw back is it's more mechanically complex.

I was also more difficult if not impossible to upgrade current mulit-rotor stabilization systems to variable pitch with firmware alone since there was four servo outputs needed as well, separate from the ESC output/s.

My guess was a whole new line of variable or collective pitch multirotor stabilization systems would soon start being marketed by the big name players such as DJI (maybe the Naza MCP)... But again, due to complete lack of interest in 3D quad copters, none ever made it.

The three main commercially available collective pitch quadcopters that were on the market from 2015 to 2018 were:

At double to an order of magnitude, the cost over the reversible type fixed pitch 3D quads, there is a huge price premium. Also, they are all mechanically complicated with the belt drives despite the elegant layouts. 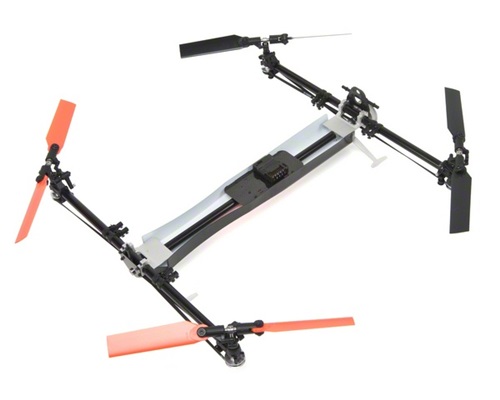 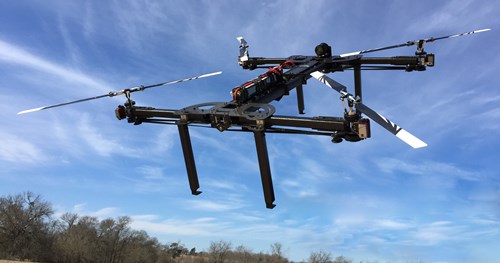 For the Hobby King shoppers, a less expensive ready to fly collective pitch 3D quadrotor called the Assault Reaper 500 was also available and it was very similar in design to the Stingray.

What I liked with this CP 3D quad is the belts were inside the arms/tubes over the external ones ones used on the Stingray. At $480 US beans which includes one of Hobby King's Orange 6 channel computerized radio's; the value at the time was very good. 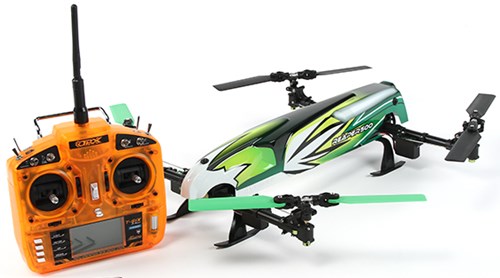 I personally would like to see a collective pitch quadrotor with four conventional torque tube booms along with variable pitch type tail rotors on the ends. The booms would all attach to the main center body of the quad which would house one big main drive gear. This big main gear would be driving all four torque tubes; it in turn would be powered by a large single brushless motor.

The addition of a one-way bearing in a secondary main drive gear may even allow auto-rotation capabilities? Yes there is the issue of stripping gears going that route which I do appreciate the belt drive method would avoid, plus a small weight advantage.

Still, it's something I would have liked to see as another collective pitch quadrotor option. I didn't see it costing nearly as much either seeing many current RC helicopter manufacturers could use their existing conventional tail booms & torque tube variable pitch tail rotor assemblies reducing both development & production costs.

Belt or torque tube, I really do like the fact there is only one motor and one ESC to deal with. For a larger size collective pitch quad, no question this design (both belt & torque tube) makes sense.

Fuel powered alternatives (nitro, gas, turbine) would also be possible using this CP method just as they are with conventional collective pitch RC helicopters. They will also sound better doing away with the "swarm of bees". They will however never sound as good as a big pair of single rotor collective pitch rotor blades beating the air into humble submission, and this again is likely why they never caught on.

The other variable pitch thrust reversal method I really like from a design and simplicity standpoint (for smaller size quads anyways), is the standard layout of using the conventional four brushless motors that are common place on all quads.

However, the motor shafts are hollow allowing a pitch rod directly connected to a micro servo below to move the variable pitch propellers. The Aerospace Controls Lab at MIT has a great video showing this very design.

This in my humble opinion is the best overall thrust reversal design for small to mid sized 3D quadcopters. But it never made it to production, and like all the other 3D quadcopters, it was a flash in the pan and will likely be forgotten.