Due to gyroscopic precession, you'll likely notice something very strange when you move your cyclic RC helicopter controls.

The pitch change on the rotor blade doesn’t occur where it should. It seems to happen 90 degrees out of phase before it should… 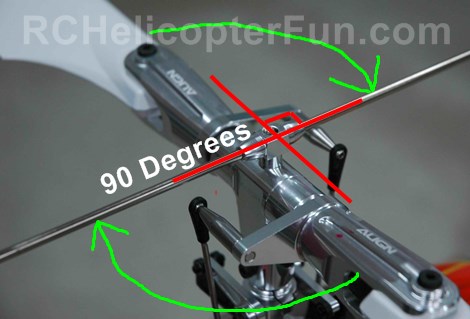 90 Degree Phase Shift Due To Precession

“I must have built something wrong or programmed the wrong CCPM mode into my radio” you say to yourself.

Nope! All is good.

What you are witnessing are the swashplate linkages up to the blade grips compensating for the forces of Gyroscopic-Precession. They will be imparting the force application up to the rotor blades 90 degrees before the actual movement takes effect in the rotor disc.

Why? Well, funny, non-intuitive things happen with large, fast spinning masses; and as you can appreciate, our RC helicopter rotor blades become a large spinning mass (the rotor disc) once they are spooled up.

Now we give a forward cyclic command. The natural assumption is the rotor blade will have more positive pitch at 6 o-clock than at 12 o-clock so the rotor lifts at the back more than the front and pitches the helicopter forward.

However because of gyroscopic forces acting on our spinning rotor disc, the lift forces of the rotor actually occur 90 degrees later, or "in front" of where the input force to was applied to our rotor disc.

This phenomenon is called Gyroscopic Precession or Torque Induced Precession.

In the above example with a clockwise rotating rotor and where the rear blade at 6 o-clock has more lift than the front blade at 12 o-clock - our helicopter would actually roll to the right, not pitch forward. Why?

Remember, the gyroscopic-precession will cause the force applied to the rotor to occur approximately 90 degrees later in the revolution. So the rotor force actually lifts more a 9 o-clock than at 3 o-clock.

The rotor disc wants to tilt to the right and our helicopter follows along and rolls right. In essence, we have just given a right cyclic helicopter control command.

This is pretty hard to visualize, but this video will clear it all up!

Most RC helicopter or setup instructions don’t include this very useful tidbit of information and believe me, it has had more than a few of us scratching our heads when we first start into the hobby.

Everything I just told you about gyroscopic precession in an RC helicopter was a lie!

Well, not exactly... Everything about the 90 degree phase shift you will see/experience on your RC helicopter holds true, but is gyroscopic precession the primary reason for it?

Turns out it's not the main contributing factor.

Just as I explained in my RC Helicopter Lift article, regarding the two lift theories; there are also two for explaining this 90 degree phase shift. The easy and commonly accepted way (precession), or the hard way that is fundamentally more accurate (phase lag).

As an RC helicopter instructor, like most instructors, I try to make this RC heli learning curve as easy & quick as possible for beginners. When it comes to explaining the reason that 90 degree phase shift or lag occurs, gyroscopic precession is simply the easiest for most beginners & newbies to grasp. It's also by far the most popular reason you will read about in aviation articles, even in the full size world.

PRIMARILY however, the precession theory is what most if not all RC helicopter examinations if your club or instructor has a formal exam, will teach and want for a correct answer. Again, I'm coming at this from an instructor's point of view, not a rotor system dynamists'.

Yes, I actually want you to pass your RC helicopter exam which will almost always want the gyroscopic precession answer.

However for those out there that want the the more correct phase lag explanation - I'll try to sum it up in a very generalized and broad scope brush. 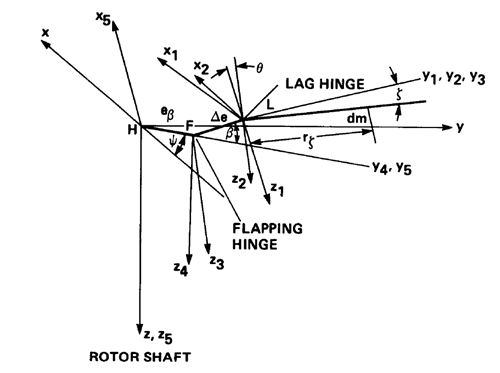 It's much too complicated to cover in detail and I'm most certainly not qualified to cover it.

This NASA publication that I've had for years dives into the math of it all. Yes, rotor systems, even on our little RC helis are extremely complex, complicated & dynamic.

The misconception is that a helicopter rotor behaves like a gyroscope. Not really, especially in the full size world where rotor RPM is too slow to have much gyroscopic effect.

Rotor systems actually behave more like a spinning pendulum. The blades oscillate up and down through each rotation with cyclic, and like a pendulum, the blades are in dynamic flap resonance that is out of phase from where the cyclic force was applied.

The video below shows this pretty well. Best to turn the playback speed down to 0.25 in the settings icon so you can see how the blade doesn't reach peak amplitude / peak flap (using the horizon as a gauge) until about a quarter rotation after achieving maximum pitch angle. This is blade flap resonance phase lag.

Phase lag or flap lag, is simply the distance (usually measured in degrees) of arc travel, it takes the rotor blade to respond and reach its peak amplitude from the time it's first given the command to do so.

Coincidently, on our RC helicopters and even many full size ones, that duration of lag occurs about 90 degrees later in rotation from where the command input was given (why the gyroscopic precession theory is so convenient to explain it).

There are many factors that affect exactly how much phase lag due to blade flap resonance occurs. Again, it's about 90 degrees on our little RC helicopters. The further out from the center of rotation on the mast the flapping occurs, or the stiffer and more rigid the rotor system is (both increasing the natural resonance flapping frequency), the smaller that phase lag angle will get. Some full size helicopters down into the 60 degree range for example.

Conversely, lowering the natural flapping frequency by increasing dampening will increase the phase lag angle. Since the blades are slower to react & respond, their peak amplitude will take effect later.

Precession or phase lag; all you need to know when building or setting up an RC heli, is that on our RC helicopters, it occurs pretty darn close to 90 degrees later in rotation. And if you are taking an RC heli exam, most clubs/instructors will want precession theory for the answer. I'll accept both :-)

If you ever get good enough to feel or experience a slightly different phase lag angle from 90 degrees on your RC heli (ie. heli crabs or corkscrews slightly); many higher end FBL systems have a phase adjustment setting. I've personally never found a need to mess with this adjustment however as the systems themselves are really good at correction for phase lag variation these days.