What Is CCPM, on an RC Helicopter & Why it's Important?

What exactly is CCPM? Is it a gimmick, a nonsensical RC helicopter marketing buzz word like "6 axis gyro" (don’t get me started on that one)?

I am glad to say no, it's a primary and very necessary function of all collective pitch RC helicopter swashplate control.

Before I get ahead of myself, I better explain what C-C-P-M stands for and what it does... the necessity of it will then become obvious.

It is an acronym that stands for... Cyclic-Collective-Pitch-Mixing. This feature is only found on RC helicopters with collective pitch (as the name suggests), it doesn’t apply to fixed pitch helicopters.

I should mention that you will see collective cyclic pitch mixing referred to as electronic (eCCPM) or mechanical (mCCPM) mixing.

Seeing that most CCPM swashplate types these days function by electronic mixing, that is what I will primarily be referencing; but please remember, all collective pitch RC helicopters use a form of CCPM (either mechanical or electronic).

Before going over the differences & pros/cons between electronic and mechanical CCPM along with the many swashplate mixing configurations; here's a very good video that shows exactly what is going on and why it's essential to collective pitch helicopter control to mix both the collective and cyclic outputs of the swashplate together.

The disadvantage with mechanical mixing comes from all the linkages and levers; there is always a bit of slop or play in them. This can be minimized on higher end RC helicopters by using ball bearings on all these lever pivot points instead of simple bushings; but of course that adds to cost and weight. Parts count and complexity is also up substantially with a mechanical mixed layout as you can see below on my Bergen Intrepid. 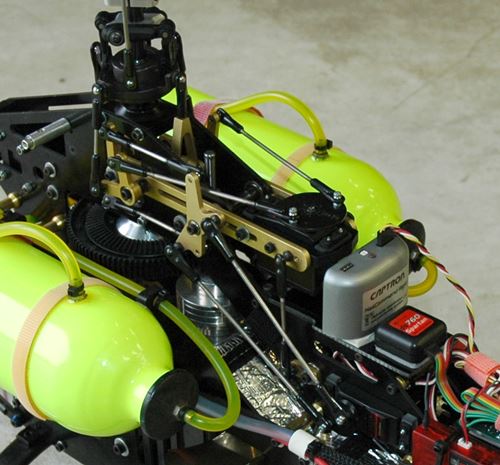 Bergen RC by the way has one of the nicest mechanical mixed systems going in my opinion - they're an art form .

This method of pitch control also puts a lot of strain on the collective pitch servo. It not only has to move the entire swashpate up and down to change the pitch angle of the main rotor blades, it has to overcome all the friction associated with all the linkages.

Mechanical mixing does have a few advantages, such as no complicated swashplate setup to avoid servo variation & interaction issues; and because the servos are typically mounted in a servo tray and not directly in the frame, they are exposed to less vibration which on a gas or nitro powered heli does have some merit.

These are minimal benefits seeing that today's servos are much tougher and there are ways to almost eliminate swashplate variations with a good computerized programmable radio and knowing the proper setup procedures.

Electronic Cyclic-collective-pitch-mixing is only possible because of advances in computerized RC radio technology and/or FBL systems. The mixing functions are all done electronically within the RC radio and the servos all interact and move accordingly. The other method of electronic mixing as I just mentioned is done internally by the flybarless stabilization system. Not all flybarless units support "internal mixing", but most do these days.

Now two, three, or sometimes four servos can be hooked directly to the swashplate without any complex mixing linkages. This of course simplifies the helicopter, reduces the number of parts, weight, and cost. There is less slop in the system and this provides very precise control of your helicopter.

As seen below with a standard 120° electronically mixed CCPM layout on one of my 600's compared to the mechanical mixed one above on the Intrepid; there are substantially fewer parts, linkages, and bearings; saving substantial weight, cost, linkage drag, and assembly/maintenance time. 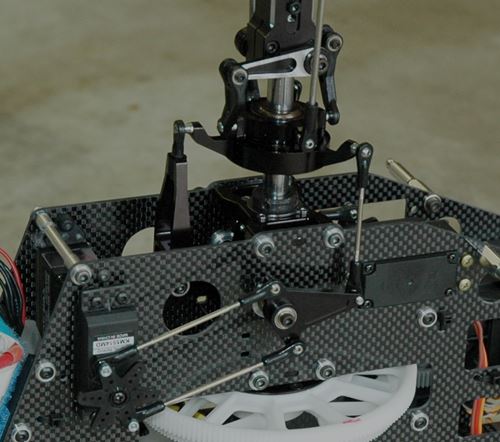 The problem of excessive strain on the collective pitch servo is also gone. Not just because all the linkages are gone, but also because the total collective workload is now shared by the three CCPM servos. 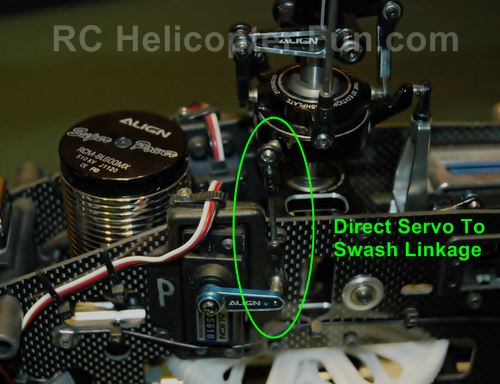 Going direct simplifies electronic mixing even further. As seen in the above photo, there are no Bell Cranks. The servos are connected direct to the swahsplate by single pushrods right from the servo arm, up to the swash.

This is as simple and direct as electronic mixing gets. Parts count is down even further, as is weight, cost, play/movement, and linkage drag. Perfect for high performance 3D flying.

There is one disadvantage however going this direct.

When you crash or have a blade strike; there is more impact force going back to the servo/s and it's much more likely you will strip out servo gears (yes, even if they are metal). When you have Bell Cranks, there are more "mechanical fuse" points that can absorb some of the impact energy from getting back into the servos. I go into more detail about this issue on my RC Servo page.

So which CCPM type is better - Mechanical or Electronic?

The only real drawback in my opinion with electronic Cyclic-Collective-Pitch-Mixing is with all the servos responsible to correctly interact & position the swashplate, if one servo failed, you would lose complete cyclic and collective control of your helicopter - plain and simple!

With the mechanical system if one servo fails, you will still have partial cyclic or collective control. I really don't buy this argument at all however. First off, servo failure is more likely with one servo doing all the work instead of spreading the work load over two, three, or four. Second, even with a mechanical system if a single swash servo fails, it is still almost impossible to control and save the bird unless you are extremely talented and very lucky.

In short, electronic mixing's many pros outweigh the two main cons (total servo reliance and more difficult setup). That is why it's almost impossible these days to find any modern RC helicopter that still utilities mechanical swash mixing.

There are basically 9 main different mixing/swashplate types available on most of today's collective pitch RC helicopters and they are all categorized/named by the placement and the number of servo inputs to the swashplate as seen in a 360° circle around the swashplate.

I would say it's fairly safe to assume at least 90% to 95% of all RC collective pitch RC helicopters out there will use one of these first 3 CCPM swash types.

This is the standard default setting for most if not all mechanical mixing swashplate types. Likewise, if your flybarless unit performs the electronic CCPM internally, you would select a 90° Normal mix/swash type on the radio.

90° Normal mixing in other words is what any normal RC radio will produce - a standard radio output with actually no channel mixing whatsoever.

The most commonly used electronic swash mixing type these days uses three servos that are equally placed at 120° intervals around the swashplate with the elevator input at the front or back of the swashplate, and the aileron & pitch inputs on the left and right sides. The pitch, aileron, and elevator channels are electronically mixed to create the proper CCPM interactions.

The only slight issue with this mixing/swashplate type is the left and right movement of the swashplate is a fraction faster than the fore and aft movement because of the overall geometry. This will cause some slight variations in control as the servos catch up to one another to create the proper swashplate angle.

I should point out that this variation gets worse at the extreme ends of swashplate travel and for most of us average fliers is totally and completely undetectable. Moreover, most good flybarless stabilization systems "absorb" these minor speed induced variations.

With 140°mixing, the swashplate geometry is evened out between the side servos and the front or back servo. This gives more consistent speed interactions between all 3 CCPM servos and reduces small amounts of variation.

This is a fairly uncommon configuration but some larger scale RC helicopter mechanics such as Vario use it. 4 Servos are used on each quarter section of the swashplate providing lots of swashplate power.

This is a variation to the more common 90° 4 Servo where the swashplate inputs are not at 12,3,6,&9 o-clock but instead shifted 45° to aid in servo placement in some mechanical layouts. It's spectacularly rare and few radios or flybarless systems will support this mixing type.

A very rare and strange configuration. This basically rotates the much more common 120° 3 Servo layout out so the aileron servo is now directly on one of the sides and the pitch and elevator are phased 120 degrees out.

This is another odd-ball that is rarely seen, but it does exist. Two of the swashplate servos (aileron & pitch) are placed at 9 and 3 o-clock. The third servo (elevator) is placed at either 12 or 6 o-clock.

I have personally never seen, much less flown a collective pitch RC heli that uses 90° 3 servo mixing so I have no idea what the pros and cons are? The one main con I see is the aileron (cyclic roll) interaction is shared between two servos, and a single servo is solely responsible for elevator (cyclic pitch), resulting in an unequal workload between the two cyclic axis.

I honestly have no idea how this can even work nor have I ever seen or heard of any collective pitch RC helicopter that uses it but some high end radios do have this swash mixing type listed so there must be some out there? As you can see in the photo of the layout, how is there any elevator (cyclic pitch) movement?

I suppose it could be used on a collective pitch tandem rotor where the fore and aft pitch control would be controlled by lift differential between the front and back rotor. Perhaps the elevator output would be plugged into some sort of lift mix control unit? Just a guess...

Keep all this in mind when you are getting your Helicopter or Radio. Don’t get a helicopter that has a specific electronic Cyclic-Collective-Pitch-Mixing type if your RC radio or flybarless unit doesn’t support it.

Again, you will be covered for the majority of collective pitch RC helicopters if you have Normal 90°, 120° 3 servo, and 140° 3 servo; and for a little large bird reassurance icing on the cake, 90° 4 servo mixing/swashplate types on your radio and/or flybarless system.

If you wanted to learn more about 120/135/140 CCPM swashplate setup, I have an e-book that goes through the entire process. Just click on that link or the image of the e-book if you are interested in it.

I hope that clears up any “Mix-ups” you might have had. Sorry - bad humor, just couldn’t resist.