After the large number of e-mails I have been getting on toilet bowl effect and how to fix it, I thought it was time to write a page on the topic seeing that if you have a micro RC helicopter with a flybar – you will most likely run into the infamous TBE sooner or later.

Toilet Bowl - TBE for short is a condition of flight that all micro RC helicopters (with flybars) are susceptible to.

That said, micro coaxials are more prone and I'll be using them primary as examples in this write-up; but all micro helis with flybars such as the Blade 120SR or mSR can also experience it.

As the name suggests, a micro heli that experiences TBE will, in a way, mimic what would happen if it was caught in a whirl pool or being flushed down a toilet.

I personally don’t really like this "toilet bowl effect" description since it is somewhat inaccurate. The helicopter actually behaves like you are giving it rotating cyclic commands as it traces out a circle in flight, but with the nose of the helicopter not turning.

I feel a better description would be the "cyclic circle effect". I often get the “my RC helicopter has TBE and it keeps spinning” question. The first thing I have to determine with these questions is if the heli is spinning (yawing) like getting a rudder input – this is not TBE.

As I mentioned, toilet bowl effect acts as if you were giving cyclic only commands, the nose will stay more or less pointing forward and will not turn. In short, if your coaxial heli yaws like you are giving rudder commands, you have a mixing, trim, or binding rotor shaft issue (micro coaxial heli) or weak tail rotor motor (micro single rotor heli). If your heli is tracing out a cyclic circle – you have TBE.

I have read all kinds of causes of TBE on micro RC helicopters with flybars, but there are primarily only two:

They will cause vibrations, but not TBE. I have added so much weight to both my upper and lower blades and flybar of my mCX and CX3 to give such bad vibrations the helis were a complete blur in flight; but no TBE was encountered at any time with these horrible out of balance conditions.

I also set upper blade tracking way out to lunch – nope, no TBE either, just very bad vibrations. It is possible vibrations intensify the toilet bowl effect, but they are not the root cause…

TBE is simply caused by the flybar on the upper rotor of a micro coaxial or the flybar on single rotor head not responding as quickly or more accurately, exactly when it should to correct for any pitching and rolling (forward/backward/left/right) movement of the helicopter.

To understand why this happens, you first have to understand what the flybar is doing during flight. If you don’t care why it happens and just want to know how to fix it – scroll down to “THE FIX” further down this page.

This is actually a complicated topic and you may want to read the section on Bell and Hiller rotor heads to get a better understanding of what the flybar is actually doing on a RC helicopter.

A very simple explanation is it automatically changes the pitch angles of the rotor blades to stabilize the helicopter if it is pitching or rolling in any direction.

The main thing to understand is the flybar is responsible for this self correction, and for it to work, it has to apply the pitch change to the rotors at exactly the right time in order for the correction to take place when it should.

I put that last part in bold because if the pitch change doesn’t happen when it should – you guessed it, TBE results.

Why would the flybar not respond when it should?

There are a few possibilities such as a bent flybar (in the correct direction) or a bent upper rotor shaft.

These bends would have to be very significant before toilet bowl effect would happen however. The main reason TBE happens on micro RC helicopters is very simple...

The Flybar is stiff and binding on the pivot points in the head or on the ball links going from the flybar to the rotors.

If the flybar/linkages are stiff, it takes a longer time for the flybar to tilt and change the pitch angle of the rotors to self correct.

In essence, the corrections occur out of phase so an input from the flybar to stop a forward tilting of the heli say; will actually occur later in the rotor travel and cause a right roll instead of a backward pitch movement.

Basically the flybar is playing catch-up the entire time and of course can't stabilize the helicopter. Taking the above example "full circle"; if the heli is now rolling to the right with a stiff flybar not responding quick enough - instead of correcting for a right roll, it will give a rear cyclic pitch change.

Now the heli is pitching backwards and once again the late correction from the flybar doesn't correct a backwards pitch but instead changes the pitch on the rotors to initiate a left roll. Hopefully you can see what is happening here. The helicopter will never stabilize as the flybar is always reacting too late in the rotor cycle and produces toilet bowl effect.

The stiffer the flybar, the more out of phase the correction will occur and the larger and more pronounced the toilet bowl or cyclic circle will be.

The other possible cause of a slow reacting flybar is stiff or binding upper blade pivots. As you can imagine, if the blades are slow to pivot on the head pins, that has the exact same effect as a binding flybar pivot.

The most common reason for a stiff flybar is the ball links on either/both the flybar ball or upper rotor blade ball are too tight, I will get to that in just a minute. The other possibility is the flybar is not pivoting freely in the upper rotor head or on the rotor shaft. To determine this, disconnect the flybar linkages and pivot the flybar up and down.

Ideally, you want the flybar pivoting so freely, that if you blow down on the flybar weights like you were blowing out a candle, the flybar will move with ease. You could also give the flybar a tap to pivot it down and it should be free enough that it bounces up and down at least once as it pivots in the head.

The flybar should actually feel a little bit loose in the head or on the rotor shaft to achieve that kind of free movement. If it is tight, take a little 400-600 grit sand paper and polish the plastic pivot points of the flybar or the inside of the flybar head. I like to use a little silicone spray as well to keep things nice and free. Don’t use anything heavier or petroleum based sprays like WD-40. This would cause dirt attraction and cause even more binding issues. If you don’t have silicone spray – don’t use anything at all.

As I mentioned, the most common culprit of a stiff flybar causing toilet bowl effect is tight and stiff ball links. This is also why there is only one ball link push rod on one side of the upper head and not one on both sides. That would mean two extra ball links causing friction robbing flybar pivot speed. 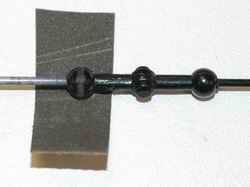 The most likely cause of a stiff ball link is the seam on the plastic link ball from the molding process. Again, take your 400-600 grit sand paper and gently polish the link ball/s on the flybar and the one on the rotor blade to remove any ridges or imperfections that might be causing a tight fit. Snap the link/s over the ball/s and recheck. 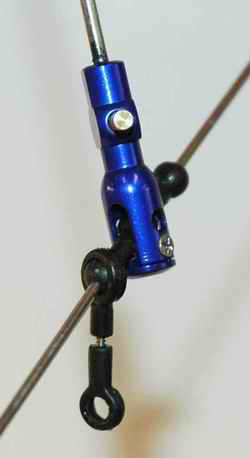 The link should pivot so freely on the ball that the pull of gravity on the link will cause it to pivot on the ball. Once again, you know the fit is perfect when the link actually feels a little loose on the ball.

This is just for micro RC helicopters. If you fly larger single rotor birds, you want the ball links tight and secure, but for the upper head on a micro coaxial or micro single rotor, a little looseness is desirable to eliminate toilet bowl effect. It is a fine line between too loose and coming off in flight, or a little to tight causing TBE.

After you polish your balls (don’t laugh – it’s too late at night to come up with a better description), you can now do something called “sizing”. There are actually special ball link sizing tools on the market, but I have always just used needle nose pliers to perform this task. 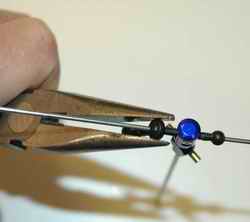 With the link on the ball, squeeze it gently with the needle nose pliers while moving the link around on the ball. I will finish up with a dab of silicone spray to the link and ball to give the best friction free fit.

Once again, the flybar should still be very easy to move after hooking the ball links back up. Blowing on the flybar weights or bouncing it up and down in the head should produce a free almost loose feel.

Lastly check the upper blade pivots for easy rotation on the head pins. Again, they should feel a little loose, just like the flybar pivot. The biggest culprit here is a piece of hair or something similar caught between the blade and the head causing a slight amount of binding. 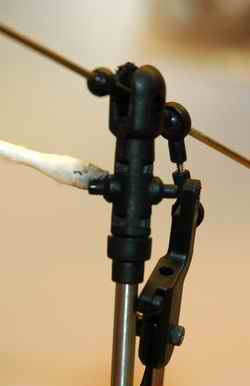 Over time, a gummy residue can also build up on the pins as the lubrication on the pins attracts dirt and dust. Clean the pins with some isopropyl alcohol.


Here I am using a Q-tip saturated with isopropyl alcohol to clean the upper head pins, notice just how much dirt and grime is being removed off the pins. This procedure should be regarded as regular maintenance on any micro coaxial heli. May as well do the lower head pins (if it's a coaxial) at the same time to keep your cyclic response smooth and crisp. 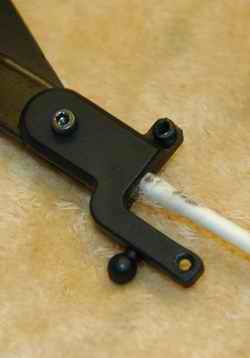 Clean out the hole in the blade or blade holders as well by using a tooth pick or something similar saturated with isopropyl alcohol.

Re-lube the pivot pin with a very light lube such as silicone spray or light silicone oil. Refit the blades and confirm they pivot on the pins with next to no effort.

That should do it... Go for a test flight and notice the improvement. If you are still encountering a very slight amount of toilet bowl effect, something is still a little too tight or dragging – best to play it conservative at first when getting things loosened up – going too loose on the links of course can be just as bad if one snaps off a ball during mid flight. Often, just flying the heli now a few times lets the components loosen up on their own and any remaining toilet bowl effect will slowly fad away.