The Blade 450 3D RC helicopter replaced the original 400 and the 450X (flybarless version) has now replaced the 450 3D. Both have been discontinued, but building on the 450's success is the Blade 330X (same size, different sizing method).

Blade continues to strive to become the number one entry level brand manufacturer to help get folks introduced to this hobby both in an economical, and more importantly, functional way.

All of these 450 size machines have excelled at this!

For those of you who have spent time on my site, read my best RC helicopter page, or watched any of my RC heli flight school videos, you know I was and still am a pretty big fan of 450 size helicopters for your first serious go at collective pitch .

The Blade 450X is right up there on my "recommended list".

That link takes you to a review I did on it and it's definitely also one to consider if you are in the market for a ready to fly flybarless 450 size heli that comes with a 6 channel computerized radio.

Blade 450/X Improvements Over the Original 400

Aluminum head, but it still uses plastic blade grips for weight reduction plus they offer some flex for tamer cyclic response. There is however a metal blade grip upgrade if you want to put them on later down the road. In fact, the new 450 has a good many aluminum upgrade parts if you want to upgrade.

Better quality head dampeners over simple o-rings with shims that wore out quickly (if not properly cared for).

Full size dampeners like these last longer since the entire dampening area of the head block is utilized - you don’t need to use shims to over-compress the older style o-rings (one of the causes of per-mature dampener failure).

Higher Amp ESC - 35A over 25A. This was an issue with the original Blade 400 if you flew in very hot weather and really pushed it hard using high discharge rated packs (30C and over). If the conditions were right, the stock E-flite ESC could go into over-temp protection mode. Many people who experienced this problem, eventually upgraded to a 30 or 35A ESC.

That's the fastest tail servo eflite has ever produced up to this point; in fact, it's one of the fastest micro tail servos period! This is great news since the tail servo is one of the first servos that people replace on their 400's after they learn to fly it and start progressing into simple sport flight.

The DS75 at 0.10 sec/60 was just too slow for robotic tail hold once progressing past basic flying getting into aggressive pirouetting maneuvers.

Gears will still strip out on the 76's just as they did on the 75's during a crash so it's not like they are going to be any stronger in my opinion (all micro servos with small nylon gears strip - but metal gears would have pushed the costs and weight up as you know). The simple reality is don't crash, and you won't strip nylon servo gears :-)

Another good "component" improvement in my opinion is the new G210 gyro paired with a faster tail servo.

The other nice benefit it has over the older G110 is an adjustable travel rate (gyro end limit setting) pot so the gyro will never send a signal to the tail servo that could over-travel and stall it out (a common issue with the older G110).

It’s not a dual direction end limit that is used on higher end gyros, but as long as you have your tail servo arm very close to center and at 90 degrees to the pushrod and the pitch slider centered on the tail rotor shaft, the simple single end limit adjustment will work fine.

It's basically the same setup as on the Futaba GY401 if you're familiar setting the end limit on it).

The Blade 450X is the flybarless version of the 450 3D and apart from having no flybar, is essentially the same heli sharing most of the same basic parts.

There is a slightly more powerful motor, a simplified FBL rotor head. There is no separate tail gyro required because the tail gyro is built into the flybarless electronic stabilization system.

On that note, the hidden gem in this flybarless version has to be the Spektrum AR7200BX DSMX receiver.

The Microbeast is one of the most talked about flybarless systems on the market right now that basically appeared out of nowhere to take on the big players in the flybarless stabilization game such as Align's, Mikado's VBar, Futaba's CGY750, MSH Brain, and my favorite FBL system to date, the Bavarian Demon 3X.

I'm not getting into a heated debate here as to what if any of these systems are better - in my opinion they are all very good and there are pros and cons to each one. The Beast however is very simple to setup and for the first time beginner new to flybarless, it's one of the best FBL systems on the market!

The AR7200BX is simply one of (if not the) easiest FBL units to setup & tune if this is going to be your first full size serious FBL system (not a built in micro heli FBL unit such as the AS3X in all of blade micro CP helis).

The Blade 450X comes as a ready to fly version. They used to offer a BNF version as well, but it was discontinued. 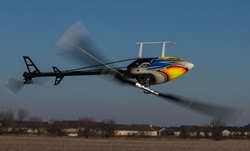 It therefore makes perfect sense Horizon will keep the lower powered 3S RTF 450X as it will be the best choice for people just getting into collective pitch.

The bind & fly 360 will be for the hard core 3D'er or a great option for those who got the RTF 450X and then upgrade to the 360 as their skill level dictates (using of course the DX6i radio that came with their Blade 450X RTF).

There is no question the 450X is a much more stable flying heli than the flybared 3D version. It is one of the best entry level, pre-built 450 size helicopters on the market right now in my opinion. Parts are easy to find as most hobby shops carry Blade product; and it of course comes with Horizon Hobbies usual very good customer support and warranty.

That after-sales support is what sets Blade above the no-name stuff direct out of China and you pay for that service & backing. Of course, resale value is much better because of this as well. 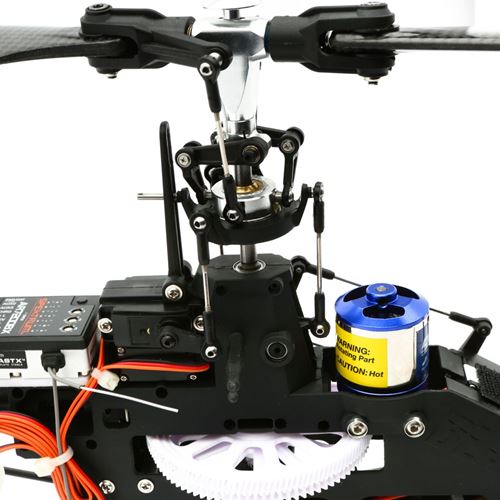 I encourage you to also read my review on the Trex 450 Plus DFC as well so you have a better idea of how these two 450's compare to each other to get a better idea of which would be the best choice for you. I would summarize the comparison between the two this way...

At the end of the day, they are both very good 450 size ready to fly RC helicopters for people who are just getting into collective pitch. It may ultimately come down to something as simple as which one you like the looks of the best and which radio protocol you prefer (Spektrum DSMX or Futaba S-FHSS).

In short, the Blade 450 RC helicopter is an improved Blade 400 keeping what worked and changing out what could be improved while making it more visually appealing (to some). Flight/performance wise, it is very similar with an overall increase in performance potential thanks in part to better anti drift gyro technology, proper tail servo end travel adjustment, faster tail rotor servo, more precise cyclic control with the better head dampening, and slightly longer flight times with the extra 400mAh battery capacity.

The 450X has much better stability and flight tracking due of course to the very good flybarless stabilization unit. It's also noticeably more powerful and agile than both the old 400 and 450 3D.

Parts support on the Blade 450's is excellent, especially since many of the same Blade 400 parts are utilized on the new 450's. There is after all a very real reason I recommend most Blade RC helis and Align Trex Helicopters - Easy to find parts at the local hobby shops or on line pretty much all over the world. Again, why I choose to purchase & fly both these brands myself.