RC Helicopter Radios - What Features To Look For 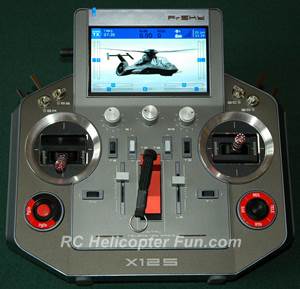 RC helicopter radios / programs have some very interesting and different features / functions over that of standard fixed wing or multi/quad-rotor.

Time to learn about these features and why you can’t setup or fly a modern day collective pitch RC helicopter without most of them.

This article is geared towards collective pitch RC heli radios, not little micro fixed pitch stuff that most of these RC helicopter radio specific features don't apply to.

“Can I fly an RC helicopter with my RC airplane radio?”

I get this question a lot. The simple answer used to be "NO!"

Wait a minute... We are living in the 21st century now!

That was true up to perhaps 10 years ago; but thankfully, we now we have computerized radios that include both heli, fixed wing, and quad/multi-rotor specific software built into them.

That is just another reason why I said on the RC radio gear page, you should only consider getting a computerized RC radio when getting serious about this hobby.

This is the most important difference that an RC helicopter radio (or heli radio software) has over a fixed wing or multi/quad-rotor radio/software.

An airplane or quad/multi-rotor requires the throttle output alone to be controlled by the up/down movement of this stick.

Even though these two functions (throttle and collective pitch) are controlled with one stick, they are on two separate channels and take up two outputs on the receiver. One is the throttle output channel and the other is usually the auxiliary 1 output channel which on collective pitch, we usually call the "pitch" channel.

Why separate them? Why not just hook the motor ESC or engine servo and the collective pitch servo up to the throttle channel by way of a Y splitter? This question leads us into the first four RC helicopter radio specific functions that are dependent on this separation of throttle and collective pitch.

The throttle hold function will allow you to lock the engine throttle/speed at a pre-set value, usually idle or electric motor off while still having full control over the collective pitch using the combined throttle/collective stick. This function is usually activated by a toggle switch on your RC helicopter radio.

Why would you want this function?

If you are practicing auto rotations , you need throttle hold to lower the engine power down to an idle or turn it off, but still have full collective control on your main rotors to perform the auto rotation.

Throttle hold is also a very handy safety feature for both fuel and electric powered helis because it will prevent the rotors from spinning up if you accidentally bump the throttle stick on your radio when the throttle hold toggle is turned on ("throttle hold active").

It also allows aerobatics by keeping your rotor speed high, even while pulling the throttle/collective stick down low to give negative collective pitch. Without this "separation", the motor/engine would also be lowered but thankfully, that is not the case. The end result is you can now fly the heli upside down (inverted).

Once again, the idle up/flight mode function is usually selected by a toggle switch on the radio. Some RC helicopters radios have a multi position idle up toggle switch that allows you to set more than one idle up speed for more head speed flexibility (normal, sport, and 3D for example).

Computerized radios will take this one step further... The idle up (now called the flight mode switch) is used to select different throttle and pitch curves giving the ultimate in flexibility - our next topics.

Ah yes, throttle and pitch curves, the black magic of collective pitch RC helicopters to many, but it's really simple actually when you look at what each do separately. 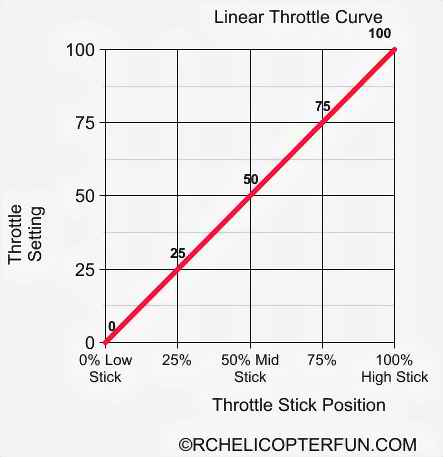 The above image show a graphical representation of a basic linear throttle curve.

Computerized radios will allow you to customize this curve so you can now set the throttle speed to whatever value you want at different throttle stick positions to enhance whatever type of flying you are doing. 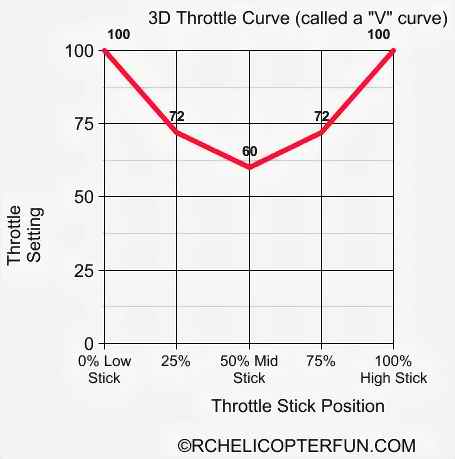 This graph shows an example of a throttle curve for full on aerobatic flying with a fuel powered heli. The throttle output at the low stick setting is set at 100% power to give maximum engine climb out power when the helicopter is inverted and using full negative collective pitch. At mid stick the power is set to 60% so the rotor head won’t overspeed with the reduced collective pitch rotor drag/loads. At full stick, the power setting is once again set to 100%, for the maximum climb out power with full positive collective pitch.

A good computerized radio will allow you to program at least 5 different throttle point settings throughout the range of stick movement - one setting at low stick, one at 25% stick, one at mid stick, one at 75% stick and the last one at full stick. This would be called a 5 point throttle curve.

A good computerized RC helicopter radio will also allow you to see this information on a graph, just like the ones pictured above. This is important in case you mess up on one of the settings, it will be very easy to identify a curve programming blunder if you can see it visually. 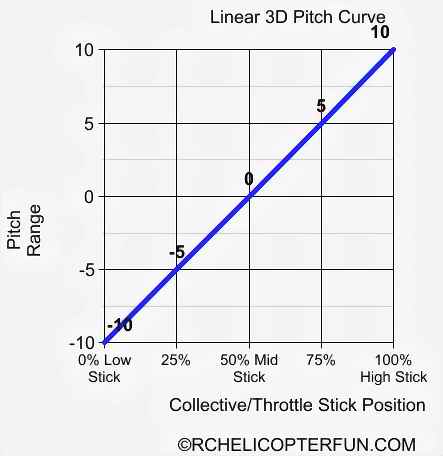 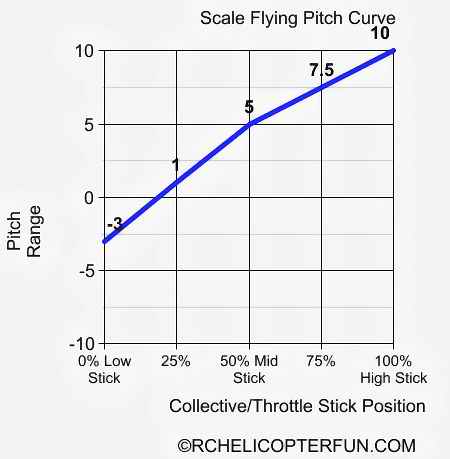 Here is a more docile pitch curve for normal or scale type flying. It produces negative 3 degrees of pitch at low stick, plus 5 degrees at half stick, and plus 10 degrees at full stick. Still a little too aggressive for learning on, but hopefully you get the idea.

Once again, just like programmable throttle curves, a good computerized RC helicopter radio will show the pitch curve on a graph for the same reasons and have at least 5 setting points – this would be called a 5 point pitch curve.

Programmable throttle and pitch curves have caused much confusion over the years; especially for those new to collective pitch RC helis. The main problem I see is first realizing that both throttle and pitch curves are completely separate from each other and that you almost always need more than one of each for several specific areas of flight. Next up is a simple lack of understanding of what you are actually trying to achieve with each one.

The whole idea behind pitch and throttle curves is to produce the right amount of power for a given pitch angle, at specific throttle stick positions based on your flying style, the various flight modes you want, and the machine you are flying. If you think of them that way; pitch and throttle curves should start to become a little less black magic, and more science based reality.

Keeping things simple, I generally set my pitch curves first. Most heli kit instructions will include the recommended pitch settings for different types of flying. I then set my throttle curves to give smooth and steady power throughout the collective pitch range. Like I said before, having this information displayed graphically on your radio is a big feature. You always want nice smooth pitch and throttle graphs, no erratic values or sudden changes. 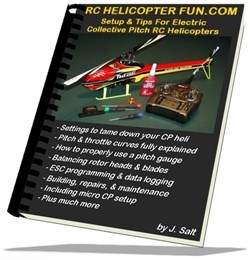 My Setup & Tips eBook covers all this in much more detail and shows you exactly how to setup your pitch and throttle curves, how they work, and different ones for different flying styles from tame to insane.

If setting up collective pitch RC helicopter curves is giving you trouble, this eBook should answer all your questions and likely many you never even considered asking before.

Click on the image if you wish to learn more about what's inside. 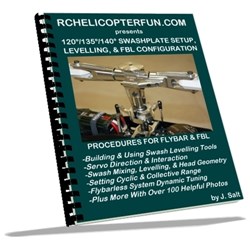 Most of today's flybarless systems do the CCPM mixing internally, so this specific RC helicopter radio feature is not used as much these days unless your FBL unit doesn't offer internal mixing (the Align 3G & 3GX come to mind), or you still rock a flybar.

Regardless of whether the mixing is done within the radio or in the FBL system, CCPM mix programming is another of those "mystery" RC helicopter functions that cause many a newbie CP pilot much head scratching and web searching.

Yep, I wrote an eBook to help out with that as well if you're interested in learning more about it.

The next RC helicopter radio specific function is Tail Rotor Compensation. This is also called revolution mixing by many people/radio manufacturers.

As we talked about in the helicopter theory section on the torque control page , the reactive torque loads on the heli change when the throttle & collective are increased and decreased.

On a computerized RC helicopter radio, this function is programmed on a menu screen in the same way – a mixing value for up and one for down. Good radios will have two and sometimes three different settings for different types of flying such as normal, sport, or 3D.

Tail rotor compensation settings are adjusted by trial and error and are never perfect - but they are better than nothing.

The gyro gain function uses a radio channel and toggle switch to remotely change the amount of gain on the tail gyro. The gain output can be adjusted from 0 to 100% based on what gain setting you wish to use on your specific gyro.

Generally you will have at least two selectable amounts of gain for different head speeds/tail speeds, and/or have the ability to toggle between heading hold or rate mode gyro operation as all modern day gyro's are put into the different modes of operation by the gain channel output.

Most computerized radios allow you to assign the gain channel output to a specific toggle switch. You might like it assigned to your rudder dual rate toggle, your flight mode toggle, or a separate toggle if you want to switch between rate and heading hold mode.

Other radio outputs could be used to put the flybarless unit into rescue mode by activating accelerometers to level out and/or upright the helicopter. More options allow you to change the amount of "stabilization help" the flybarless controller offers, or alters how reactive/responsive the helicopter controls are.

For those that fly multi-quad rotors, these functions are likely already very familiar to you. Same goes with fixed wing that are also now using electronic stabilization systems. In short, these are not really RC helicopter radio specific features per se, but they are worth mentioning only because they were first seen on RC helicopter flybarless systems/controllers, before they migrated over to the other forms of RC aviation. 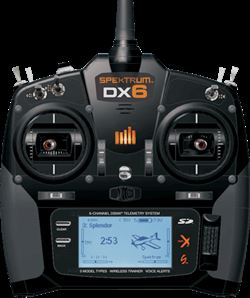 If you are just getting into this hobby and are looking for a good entry level computerized RC helicopter radio that offers all the important functions and features that I have just talked about - the 6 channel Spektrum DX6e or the DX6 really can’t be beat for the decent price.

If you know however you are going to either start with or eventually progress into larger collective pitch RC helicopters (larger than 500 size), you may want to consider a more intermediate level radio such as the Spektrum DX8e or DX8. Having that extra or two extra channels along with telemetry will eventually come in very handy with a larger bird.

Here is my page that talks about more computerized RC helicopter radios and covers various features to consider if you are interested in learning just what is out there and how different brands compare. I only mention Spektrum here because it's one of the most popular brands making it both easiest to get help with, and that is carried at most hobby shops. Spektrum radios are also very easy to use and intuitive to program/operate which to me is very important when first starting out.

The learning curve is already a steep one when getting into collective pitch helicopters, and having an easier to use computerized radio will keep that curve manageable.