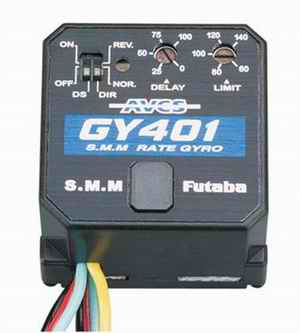 After many years, the Futaba GY401 Gyro used to be the bench mark gyro that all others were judged.

Ask 5 RC helicopter enthusiasts what the best solid state heading lock gyro was when they first came out, and 4 of them will likely say the GY401.

It is said that copying someone or something is the highest form of flattery; guess that is why there was a cheap GY-401 clone hitting the market almost every month back then. Unfortunately while many try – none provide the performance or piece of mind Futaba’s GY series of gyros offer.

The Futaba GY401 gyro was for the heli pilot who wanted both flexibility in terms of what model heli the gryo works well with and wants the assurance that a gyro malfunction or failure won’t bring down his/her dream machine.

The GY-401 worked well in almost every single rotor bird out there from 400 size electrics up to 52cc gas or MW54 powered turbine monsters with rotor diameters approaching 2 meters. In fact, Bergen RC recommended the the GY 401 in their industrial Observer line of heavy lift gas and turbine RC helicopters.

The large range of heli size usage and outstanding performance is why the GY-401 outsold every other performance gyro on the market. In fact, when I asked my local (okay, 500 km away) hobby shop how many Futaba GY-401’s they sell – the numbers were remarkable. More 401’s than all the other gyros combined back then – pretty impressive!

I know many people who started with a Futaba GY401 gyro in a small 400 size electric knowing one day they wanted to get into a larger electric or nitro powered heli. The GY-401 followed the progress and that alone offered some nice value if you didn't want to have to purchase another gyro for your next bird.

AVCS works better than other HH gyro systems at correctly compensating for and eliminating drifting issues in heading lock/hold mode caused by temperature changes within the gyro.

The GY-401, just like all of Futaba’s AVCS gyros used a SMM gyro sensor and is said to be better than other conventional solid state yaw sensing technologies since all the electronic components are combined on a single chip improving performance and reliability.

Both Gain and Heading Lock/Rate modes are remotely adjustable through the gyro settings menu on a computerized radio.

If you didn't have a programmable computerized radio that you can program in different ATV values for the gain settings, the Futaba GY401 will not work for you – there are no gain or mode selection options on the gyro case. A better choice for non computerized radios or if you are lacking a spare channel for remote gain would be the Futaba GY240 or the E-flite G90 (for smaller helis).

The Futaba GY401 had a built in Limit Trimmer adjustment so you can set the amount of tail rotor servo travel to avoid servo over travel and stress on the servo. This is an easy way to set the travel over the more conventional method of changing servo arm/tail rotor pitch arm lengths.

As mentioned, the GY401 supported both slower analog tail rotor servo pulse rates or can be switched to a 270 Hz high frequency rate for fast tail rotor specific digital servos. Speaking of servos, the 401 came in two different packages.

You could purchase the Futaba GY401 Gyro only package or the Gyro/Servo combo package. 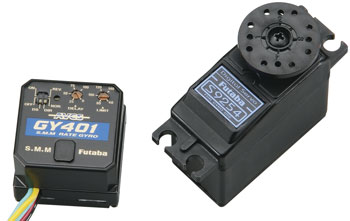 The servo combo included the ultra fast digital Futaba S9254 tail rotor specific servo. This servo boasts a speed of 0.06 sec/60 degrees and a torque of 47 oz-in. It has been perfectly matched to operate with the GY401 in fast digital mode.