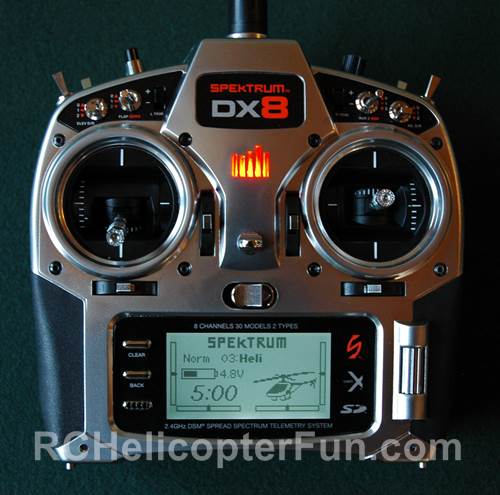 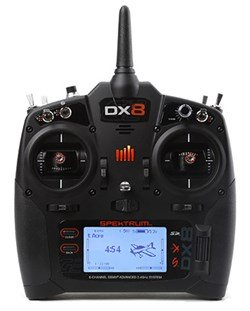 UPDATE: The New Spektrum DX8 has replaced the original.

It's similar to the original DX8 talked about on this page; but follows the new black case concept Spektrum has adopted, along with solid and robust dual diversity antennas, and of course voice alert.

The DX8 was without doubt, one of the most popular radios released by Spektrum RC in the past few years.

That was a busy year for Spektrum and JR with the release of the JR X9503 (the radio I fly with most of the time) and then a month later we were wowed with the JR 12X and to top things off, Spektrum also introduced their latest DSM based fully backward compatible spread spectrum technology called DSMX.

There was still a gap in the 8 channel segment making some of us wondered what might be lurking around the bend with lots of speculation.

Would Spektrum bring out a reworked DX7 or something completely new? The DX8 has answered that question and if you are in the market for a new radio in the intermediate sport level – I can’t think of a better choice – it certainly has me second guessing my JR X9503 purchase, but I love that radio now too much to give it up.

So why all the anticipation over the Spektrum DX8?

Yep, Spektrum has taken its proven telemetry experience from the DX3 ground radio and is now offering telemetry on this new generation of computerized air radios and has follow up with telemetry on every offering since - even right down to the entry level DX6.

Well, simply put, telemetry will send information from the RC aircraft back to the radio giving you real time data from a variety of sensors taking continuous data readings on board the RC helicopter, airplane, or glider, and is a natural adaptation made possible by 2.4 GHz technology.

These readings can include receiver battery voltage, flight pack voltage if you fly electric powered aircraft, temperature sensors for engine head temp, motor temp, ESC temp, battery temp to name the most common readings you might like to monitor during a flight. There are also two optional RPM sensors (one for IC engines & one for brushless motors) to monitor engine/motor RPM.

No more guessing about the effectiveness of new mixture settings, a new battery pack, or how a new propeller/motor combination is working out. For those of you who have lost control of your RC helicopter or plane because of low RX voltage from a NiMH RX battery that false peak charged, you know how useful this real time telemetry data will be – It would have saved my Bell 222 .

The telemetry data as I said can be viewed in real time on the radio’s nice large 128x64 pixel backlit LCD display as it's happening on the aircraft. Unfortunately, reading streaming data is not very practical during a flight, especially on a heli or faster plane that takes full eyes-on concentration. This is why the data of a flight is recorded for later analysis and the best part about this is you can program alarms into the radio (both audible and vibration) to warn you if any of the telemetry readings you are monitoring wonder outside the parameters you set.

For example, if your engine head temperature is getting too hot, your RX battery voltage is getting too low (not that I would know anything about that), or your flight battery is nearing its 80% discharged voltage, the Spektrum DX8 will warn you by beeping, vibrating, or both so you don’t even have to be looking at the screen.

The other very useful bit of telemetry information gathered is how strong your RF signal is by monitoring the number of packets/frames that don’t get through to the receiver. No more guessing if you need to change your receivers position, add additional remote receivers, or wonder just how far away you can fly with larger aircraft and still maintain a solid RF link to your bird.

All this telemetry feed back data to the Spektrum DX8 is accomplished by using the included Spektrum TM1000 telemetry module.

This module will work with any pre-existing Spektrum or JR receiver that have the data log flight ports.

For those of us with these receivers that have the data ports on our existing aircraft, it will be a simple matter of just purchasing extra TM1000 telemetry modules for about $50 bucks each and the specific sensor/s for what we want to monitor.

The Spektrum DX8 Is Very Customizable

One of the other features I really like with the new Spektrum DX8 is how customizable it is with switch programming, alarm activation, timer activation, mix and mode functions, to name a few. This has been one of the weak spots as far as I am concerned with the DX7 and even the JR X9305 and is where many considered the Hitec Aurora 9 and the Futaba 8FG & 10CG having a clear edge over the comparable Spektrum and JR offerings.

No longer is this the case with the Spektrum DX8, and it goes to show Spektrum RC is listening to what its customers were looking for in a intermediate level radio and have raised the bar on the competition big time. Again, it's really no surprise why the DX8 was so keenly anticipated and is now sought after by so many.

The Spektrum DX8 has a SD card port to download data onto a SD card or upload data from the card to the DX8 for the latest firmware/software upgrades for example. Again, this is where Spektrum has listened to what its customers wanted taking cues from Futaba. The Spektrum DX8 has a 30 model memory which is certainly more than enough for most of us, but with the flash card support – you can essentially have an unlimited amount of models stored on your PC or even share/transfer settings from one DX8 to the other.

This also allows for easy firmware updates right from Spektrum's website. A perfect example of this is Spektrums new DSMX technology can easily be downloaded for free onto the first generation of DX8 transmitters that came with the older DSM2 modulation.

For those of us with the DX6i, DX7, or JR's that don't have a data port - we have to send our radio's in for the DSMX upgrade (if we feel it's worth while for our flying environment) at a cost not only in shipping but for the software upgrade itself. This again is a feature that was first introduced on the DX8 but has filtered both up and down the full line of Spektrum's SD & Telemetry equipped computerized radios. The DX8 started it all!

I know, this is a very minor thing, but it certainly made my eyes light up and was a long time coming.

Not sure about any of you, but I have left my transmitter turned on by mistake more than once and only when the low battery alarm started beeping, did I realize it.

I have since put a small LED in my DX7 and then in my JR X9503 when I got it to provide an easy to see visual aid that the radio is turned on when I am too far away to see if the display is on. The Spektrum DX8 already has that simple little "power on" LED installed and using it to light up the patented Spektrum bar graph symbol is a nice touch.

I like most people am so impressed with the Spektrum DX8; making me second guess my JR X9503 purchase certainly confirms that. The DX8 has incredibly easy programming just like the DX6i but of course way more features not to mention long lasting and precision quad ball raced gimbals.

Oh, Cost? Sorry, I never mentioned that – are you sitting down? The DX8 transmitter only is going for about $300 bucks! Not sure if Spektrum wanted to kill its DX7s sales, but the DX8 will certainly have a huge impact. I did end up getting a DX8 for a backup radio to my JRX9503. If I was doing things again, I would have definitely got the DX9, but the 9 was not available yet.

Lastly, I will leave you with a DX8 review done by Bert Kammerer.

He really dives into the different programming menus and telemetry options so it's certainly worthwhile watching the entire video if you are thinking about the DX8.