What goes up, must come down, and RC helicopter crashes are as much part of this hobby as flying the silly things. I decided to start this page after one of my favorite birds (the Bell 222 pictured many times throughout this site) met its demise.

I don't crash often because I am a fairly cautious flier and rarely fly beyond my comfort or skill level. I also try to ensure my RC helis are well cared for and always in top notch working order.

When I do crash however, it is usually a really dumb mistake on my part that is the root cause. I have decided to start documenting these RC helicopter crashes of mine explaining what went wrong and why. If it saves just one person from making the same mistake, this page will be worth it.

Hopefully (for my sake), this page doesn't get too long over the years as I add to it.

Before getting to my specific crashes however, let's look at some others first :-)

Yep, that's it. One of the most common causes of RC aircraft crashes known and I have been bit in the butt before by this DUMB mistake!!! I have learned over the years to always check the RX battery voltage before each flight since false peak detection while charging NiMH packs is a real problem and March 6th was no different except I was having too much fun and rushed to get that "last flight of the day" in before it got too dark out.

You guessed it, forgot to check the RX voltage.

The result... the fuselage is a compete write off but the mechanics will live to see another day. About $700.00 CND in repair damage and perhaps 30 to 40 hours of time required if decide to get another fuselage for it. All because I omitted a 20 second easy voltage check.

ALWAYS CHECK YOUR RX BATTERY VOLTAGE BEFORE EACH FLIGHT - especially if using NiMH RX packs that can false peak!

Moreover, if you fly electric powered aircraft and you have several flight packs, make sure you use the fully charged packs and not accidentally install one that was discharged earlier in the day. I know more than few people that have succumb to a early and devastating loss of power due to accidentally installing a discharged flight battery thinking it was fully charged. 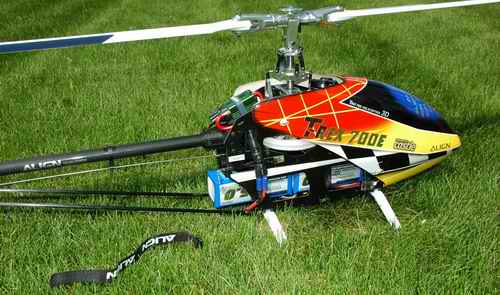 Nope it didn't crash, but I was very lucky! Those of you who are familiar with the Trex 700E's will immediately see what happened. The battery tray has partially slid out the back end of the big Rex because in my haste to get up in the air quickly, dumb-dumb forgot to put the Velcro strap that holds the packs from sliding out the back end in place.

I took off, did a couple easy circuits, switched to flight mode 2 for aerobatics, performed a loop and immediately knew something was wrong at the top of the loop. The 3G flybarless system was not as stable as I have become so accustomed to as I was fighting with it. I decided to land right away thinking it was a loose 3G sensor or something causing the erratic corrections, not for a moment thinking the battery tray had slid backwards changing the CG making the heli very tail heavy. The instant I saw the heli up close as I came in for a landing, it was very apparent what happened... "I almost lost my battery tray out the ass end!"

The only thing that saved me was something I often complain about when inserting the sliding tray. The Velcro straps that hold the LiPo packs to the the tray sometimes get caught on the frame openings when you slide it in. Well, as you can see by the yellow arrow in the photo below, that same Velcro strap I often bitch about, bunched up and caught the frame opening to provide just enough resistance preventing the entire works from sliding out the back. I will never complain about those straps again!

ALWAYS CHECK THAT YOUR LIPO PACKS, WHETHER USING SLIDING OR FIXED TRAYS, ARE SECURE!

This RC helicopter crash is a little different - yes the root cause was still pilot error (toggled the wrong switch) but a mechanical fault is the reason I couldn't save it.

The underlying fault however is still mine because I knew about the mechanical fault and decided to go flying anyways!

A little background on the mechanical first. This was the 4th flight of the day with the 600ESP of what had been an incredible fun day out at the flying field. I had noticed in the prior 3 flights however, my autorotation bearing was starting to stick and after the 3rd flight it was completely seized. No big deal I figured since I very rarely perform autos unless it's an emergency - FIRST MISTAKE!

The entire flight went without incident with the good trusty 600 coupled with the 3G flybarless system making my aerobatic flying skills look much better then they really are. Just before I decided to land, I thought I would switch my rudder dual rates on (no idea why, I usually keep them off). I have my rudder dual rate toggle in front of the toggle I have assigned to throttle hold on the upper right corner of my radio (a very normal configuration).

As bad luck would have it, I accidentally reached too far back and engaged throttle hold instead of rudder dual rate (again this is very strange as I have performed that function many times without ever engaging the wrong toggle - mojo was certainly off). This is where that stuck autorotation bearing I knew about bit me in the behind hard!

Normally engaging throttle hold by mistake while you're 20 feet or so in the air is no big deal; the rotor will maintain energy long enough to turn off throttle hold and get back up to RPM. Even if that didn't work, you could still come down soft by performing a normal autorotation. Unfortunately, my rotors this time slowed down very quickly as they were not "freewheeling" due to the seized bearing and there was no way I could auto, again because the bearing was seized. In short, I was dropping out of the air like a stone before I could get the rotors ramped back up to speed (also partly my fault for having perhaps too slow a spool-up rate programmed into my ESC). The power started coming on just before I hit the ground and was quickly spooling up just as I hit.

At this point the heli jumped back into the air now that the rotors were back up to speed, but the impact was strong enough to strip the tail rotor drive gears - I had no tail rotor control as soon as it bounced back up into the air. The heli was about 6 feet in the air now wildly pirouetting out of control and I only saw two options - land powered up with it spinning wildly (knowing the autorotation gear was seized) or hit my auto toggle and come down hard, but un-powered. I chose the second option and it turned out to be the best choice I feel.

Actually, very little damaged was done by coming down un-powered like that from only about 5 feet in the air. The rotors broke, one half of the landing struts broke (likely weakened by the first impact), and of course the tail drive gears were stripped out but that was it for damage! I contribute the low damage count to four main things. 1 - I was not that high up. 2 - The grass was very soft and spongy which absorbed a fair amount of energy. 3 - I was powered down when I hit and this is likely why I didn't bend the main shaft or head axle. 4 - This was my very first crash with a flybarless heli and I can fully appreciate how not having the flybar also whipping about as you hit the ground does save tail booms and canopies.

The good news is I had a set of tail drive gears, autorotation bearing, and main rotors back at home along with a set of X-Cell Fury landing struts that worked in a pinch on the Trex. The 600 was out again that very evening flying perfectly. The bad news of course is if I would have just stopped flying after the third flight, gone home and replaced the autorotation bearing, none of this damage would have likely happened in the first place.

As you can see, a familiar trend is developing here... My dumb mistakes are fueled by my desire to get airborne too quickly or keep flying. I know I'm not the only one, but flying these things is so fun, I/we often make hasty judgment calls. Haste truly does lead to waste in this hobby!

There is a good saying in the full size aviation world that is every bit as applicable to model RC aviation:

Take-off's are optional, landings are mandatory!