So you're considering getting the Blade 120S, but not sure if it's the right micro fixed pitch bird for you? Let's take a closer look at this neat little heli to help you decide.

Yes I have been a big fan of the original flybared 120SR (link takes you to the review I did). The main reason for my enthusiasm is I was reassured to see Horizon Hobby recognizes that many of us still love and want to learn to fly true RC helicopters; and are not the least bit interested in quadrotors.

In short, there may be some hope yet for us "rotor heads".

The Blade 120SR was such a great little helicopter to learn the basics on after flying an easy micro coaxial or micro quadrotor, or even toy RC helicopter.

Many of us also found the 120 to be one of the best little fixed pitch helicopters to fly out in the yard.

It was just the perfect size for that amount of space and could even handle some light wind. I don't know many people who didn't like the Blade 120SR or had much bad to say about it other than a few of its "flybared" short comings which the new flybarless version has completely eliminated.

I predicted a flybarless (FBL) version of the 120SR would be available over four years ago now when Blade started to introduce their micro flybarless AS3X technology which has morphed into SAFE (sensor assisted flight envelope).

It just made so much sense to have an FBL version of the 120 knowing those annoying micro flybar issues could be solved; turning a very good micro heli into a great one...

I was actually very surprised to see just how long the original flybar version lasted considering our disposable "need something new all the time" society. Testament to a good little RC heli that people still really enjoyed and wanted. This new version with SAFE is going to be even better and most importantly - more fun to fly for a broader scope of progressing RC heli pilot!

Just watching that video, it's easy to see how the annoying 120SR dissymmetry of lift tendencies along with that overly exaggerated pendulum like flybar correction are all gone.

Of course, don't expect the 120S to be a performance minded heli. It's rather "heavy feeling" in the air, doesn't have gobs of reserve power, and is meant to be a decent single rotor training aid, no more, no less.

SAFE gives the three customary flight modes that many of us are very used to now on all of Blade's micro rotary platforms:

I promised the wife I would never get another smallish RC helicopter for at home yard flying (I have too many as it is), but the 120S just looks too good and too much fun to pass up. I love flying my Blade 130X at home, but for some tame in yard flying fun, this 120 just might be the ticket me thinks not to mention I have a good supply of 1S 500 mAh LiPo packs already ;-)

It really is quite amazing how similar the overall design of this flybarless version is over the original 120SR. Many parts are still shared between both versions but there are some important differences to note. Besides the flybarless head, the single largest difference is the two linear cyclic servos are now separate components from the main circuit board.

A nice benefit so you don't have to replace the entire board if a servo goes bad which is much more likely with flybarless since the servos are working harder as they are also now responsible for rotor stabilization, not just directional flight control. 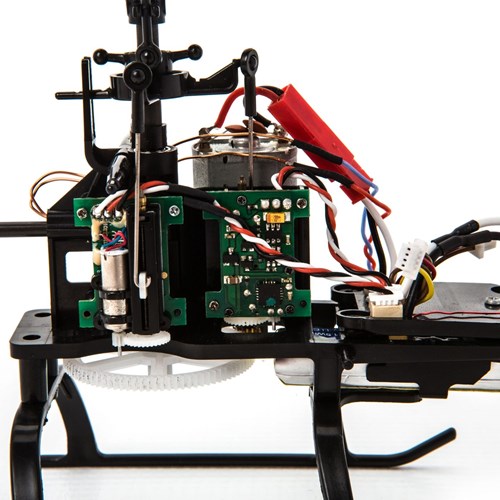 The multi purpose 4 in 1 board (DSMX RX, main & tail ESC's, mixer, and 3 axis stabilization) is now up in front of the motor instead of behind the mast. The main motor is now offset to the left side of the mast to make room for the elevator (cyclic pitch) servo.

LiPo battery removal is accessed from the rear and it looks like it will be fairly easy to hack the battery tray to fit slightly larger capacity 1S LiPo's as so many of us did with the original 120SR for longer flight times.

Flight times on the 120S by the way average around 4 to 6 minutes depending on how aggressively you fly and how kind you want to be to your LiPo's.

The Inner Workings of The Flybarless Blade 120S

Speaking of the LiPo battery. This Blade 120S uses the same 1S 500 mAh pack the original SR version did. What is different however is the charger that comes with it. 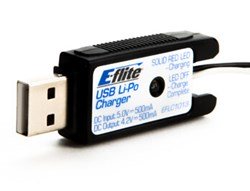 I suppose this makes sense since powered USB outlets are pretty much everywhere in our homes & vehicles these days, and ugly wall warts are, well, ugly!

The original Blade 120 was very robust and fairly crash resistant when things went wrong. Crashing into a nice soft lawn barely introduced much more than a grass stain on the rotors. The new 120S boasting the "save" feature as well as eliminating the somewhat fragile flybar will be even more robust. 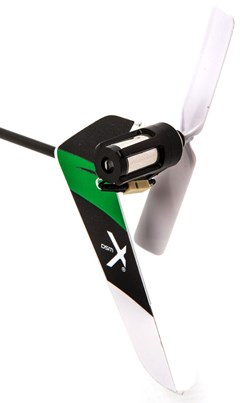 As adequate as the little coreless tail motor was on the 120SR, it's going to be even better on the Blade 120S.

The 120SR had a big and heavy flybar in relation to the rotor mass and size.

Getting rid of that heavy flybar is going to help reduce reactive torque loads immensely.

Even the 120SR tail motor was fairly long lived compared to other similar sized motorized tailed RC helicopters; so with the new S version having to work even less now to keep unwanted torque induced yaw tendencies at bay, it will no doubt last even longer not to mention keep the tail locked in even better.

Last up is weight... This has become a game changer for some.

This little rascal is tipping the scales under the 0.55 lb weight limit for those in the US that now require FAA RC aircraft registration for any model over that 0.55 lb limit - so no worries in that respect :-) 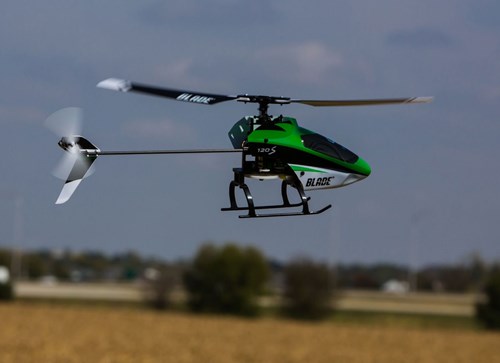 Obviously what I personally like so much about all of Blade's line of micro RC helicopters is I can fly them with the same radio I use for all my bigger birds. This alone is why I and so many people fly Blade helicopters and besides the (almost always) great customer support we get from Horizon; it's the single most beneficial and cost effective reason to chose Blade (if you fly with a SpeKtrum or JR DSM2/X computerized radio).

As you can likely guess, Blade has given us two 120S options. A ready to fly (RTF), and for those of us who already are taking advantage of bind n' fly, a (BNF) version for $30 bucks less.

Both Versions Available on eBay