Understanding how digital servos work, as a switched mode power device, will help you to make better use of them and gain a better understanding of their power supply requirements. We will take a look at digital servos through the “Eyes” of a current probe and oscilloscope.

Digital like analog servos use pulse width and pulse rate modulation in order to rotate the servo motor. The servo can be pulsed in the forward or reverse direction. The four solid state switches, under the control of the servo’s micro controller, are either open circuit or closed circuit for Ohms law efficiency.

Through the "Eyes" of a Current Probe 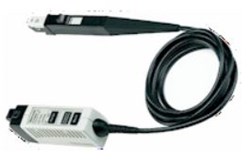 For the following waveform I applied an aggressive amount of torque with my fingers. The servo was making enough noise to convince me that it was under duress and it was aggressively holding position. Average current was 0.3 Amps which is what a Digital Multi Meter (DMM) would read. Peak current was 5 Amps. We can calculate that the servo’s resistance at zero RPM is 1 Ohm while a pulse is active (5 volt supply divided by 5 Amp current = 1 Ohm).

The pulses were much more sparsely scattered under moderate loads, sometimes a single pulse, sometimes a small cluster of pulses.

For the next waveform I was considerably more assertive in the amount of torque that I applied, more than what you would expect during aggressive flight conditions. As you can see, the pulse rate has doubled without increasing pulse width. Peak current was 5 Amps and average current 0.5 Amps. 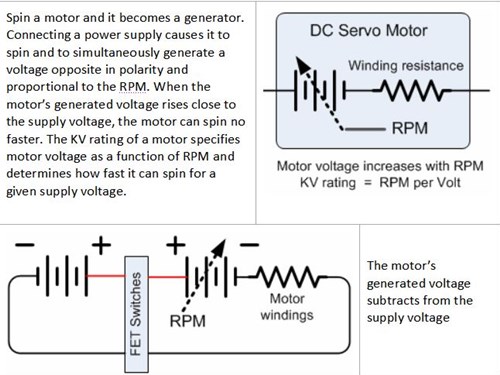 Moving From Position A to Position B

The waveform below shows what it takes to get the motor moving. The current pulses get shorter as the motor speeds up and generates a proportionally increasing voltage so that pulse height declines to almost zero amplitude and the motor can spin no faster. The pulses are not getting shorter because the power supply is bogging down, but because of the motor is simultaneously a motor and a generator.

Referring to the second cluster of pulses in the graph below, pulse height almost doubles when the micro controller works to bring the motor to a stop. The FET switches have reversed the pulse polarity so that the power supply and the servo motor’s “battery” are adding up in series. 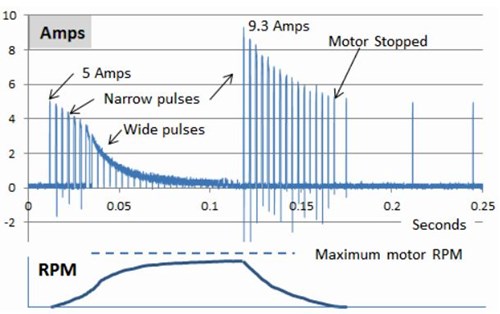 The motor’s internally generated voltage is proportional to RPM and so the voltage graph will have the same shape as the RPM graph above. Increase the voltage reaching the motor and the servo can achieve a higher maximum speed.

The following is what happens when you repeatedly run the servo back and forth, e.g. when "stirring the sticks":

Peak current is 9.3 Amps and average current consumption is 1.3 Amps for the data record displayed above. Four servos would consume an average of 5.3 Amps. The pulse peak would be 37 Amps when all four servos happened to reverse exactly in sync.

Repeatedly moving the servo back and forth is the worst case scenario and draws considerably more current than having the servo hold position against an aggressive load.

Digital servos use switched mode power which is considerably more efficient than the analog power alternative. Pulses can be very tall and very thin, with the tallest current pulses occurring when the motor is at full speed and then reversed. Stirring the sticks puts a much more aggressive load on the power supply than pulling out of a power dive. Capacitance can be used to average the current so that the power supply can meet peak demand.

The Receiver Power Supply article is the recommended follow up.

David is an electrical engineer at Tektronix. There he works with oscilloscopes, spectrum analyzers, logic analyzers, video monitors and generators.

Question/s for Dave? Feel free to use the contact form below...